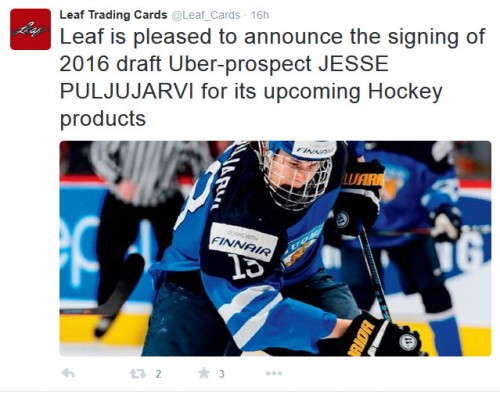 Leaf Trading Cards has announced that it has come to terms on an agreement with prominent 2016 NHL Entry Draft prospect Jesse Puljujarvi, who caught the attention of many hockey fans while playing for Finland’s silver medal-winning squad at the 2015 IIHF World Junior Championship.

Slated to appear in the company’s upcoming hockey releases, Puljujarvi will make his North American trading card debut in the coming months. He is regarded as a potential high selection and currently plays for Karpat while preparing for the draft.

“We are extremely excited to offer the first authentic signature cards of Jesse Puljujarvi,” said Leaf’s Director of Product Development, Gregg Kohn. “As a probable top three pick in the 2016 NHL Entry Draft, Jesse is a huge addition to the Leaf/In The Game product portfolio. Along with the 2015 second overall pick Jack Eichel, whose signatures will be featured exclusively in Leaf products, this is a formidable one-two signature punch! Look for Puljujarvi’s first signature cards in 2015 Leaf Ultimate Hockey, scheduled for release in December of this year.”

NHL Central Scouting recently released its list of players to watch for the draft and several top rated young talents on the list have already appeared in some of Leaf’s CHL-licensed products. Throughout this season, savvy collectors will certainly be keeping their eyes open for cards of Puljujarvi along with A-rated CHL talents such as Jakob Chychrun, Tyler Benson, Alex Debrincat, Julien Gauthier, Max Jones, Olli Juolevi, Alex Nylander, Sam Steel, and Matthew Tkachuk.

Currently, Auston Matthews is regarded as the potential top pick in June, but he chose to play in Switzerland instead of playing in the Western Hockey League. The Arizona native skates for the ZSC Lions and has had plenty of international tournament experience as he was part of the United States National Team Development Program. He is expected to play for his country at the 2016 IIHF World Junior Championship. Another highly-regarded prospect is Finnish star Patrik Laine, who presently plays for Tappara and earns a lot of praise for his goal-scoring abilities.