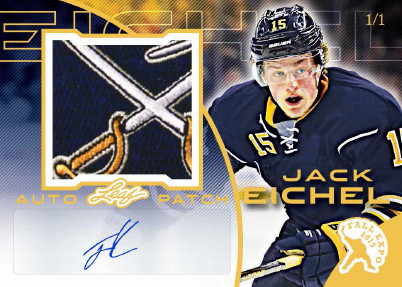 Leaf Trading Cards will be catering to collectors breaking open packs of 2015-16 Leaf In The Game Superlative Hockey at the 2015 Fall Expo from November 6 to 8 at the International Centre near Toronto, Ontario and will offer up two options at its booth – one of which will feature the company’s exclusive signer, Buffalo Sabres rookie Jack Eichel.

Those opting to break a single box of 2015-16 Leaf In The Game Superlative Hockey will receive a two-card pack that contains specially-stamped cards from previous Superlative releases. For those ready to break cases instead, they will not only receive five of the Expo-only packs, but also an additional bonus pack which will yield either a Jumbo Patch card or an Autographed Jumbo Patch card of Eichel.

“Leaf is extremely excited to be a part of the 2015 Toronto Sportcard and Memorabilia Fall Expo,” said Leaf’s Director of Product Development, Gregg Kohn. “We are equally excited to introduce 2015 ITG Superlative Hockey at this premier event and wanted to have a redemption program that would have a huge impact. What better way to make that impact than make Jack Eichel the cornerstone of the program!” 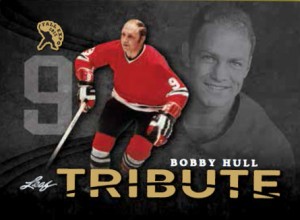 Leaf will also be handing out a show exclusive Bobby Hull tribute card. Before the Expo, collectors can visit one of over 300 different participating hobby stores and purchase two packs of a Leaf or In The Game product. When they come to the show, they can then show their Expo Passport (found in the show program or at http://www.sportcardexpo.com/BRICKS.htm) at the ticket box with their wrappers to have it validated. From there, they can proceed to the Leaf/In The Game booth and receive their card.

Naturally, packs are only expected to be available while supplies last and can only be found at the show.

A brief history of Back to the ...