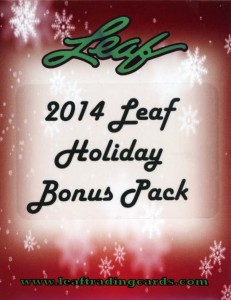 With the season of giving upon us, at least one card company is getting in on the action and spreading some goodwill to collectors, dealers and distributors with special 2014 Leaf Trading Cards Holiday Packs.

Dealers and customers that purchase boxes of specific 2014 products released by Leaf Trading Cards will get two free packs which will contain either an autograph card, memorabilia card or a printing plate. Collectors are encouraged to visit their local card stores to ask about this offer and get an opportunity to participate in this limited promotion.

NHLPA Auctions Off Jerseys for Goals & ...