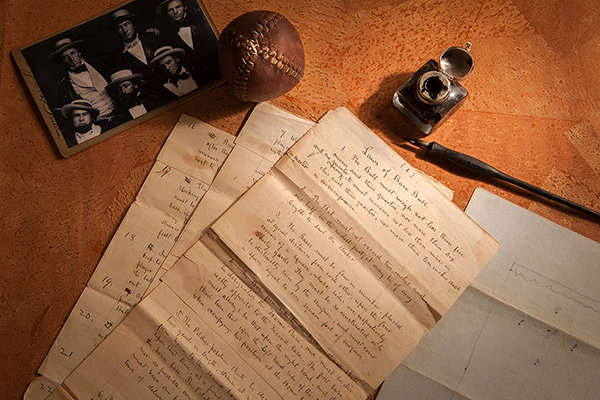 Most movies about time travel warn about the dangers of changing history. But what if history was wrong? The earliest known set of baseball rules, a document titled “Laws of Base Ball” has changed some of the game’s backstory. Far surpassing expectations, SCP Auctions sold the document for $3,263,246. That’s one of the highest prices ever paid for a piece of sports memorabilia in a public sale.

The document first surfaced in 1999. It was bought at auction as a part of a general documents lot. Without an author, not much was known and it was essentially set aside.

When the owner brought the manuscript to the attention of SCP Auctions, they began to dig deeper with the help of John Thorn, the Official Historian for Major League Baseball.

“When we started to peel back the layers of information held within these documents – and their origin and purpose was revealed – we were overwhelmed by the gravity of their historical significance,” said Dan Imler, vice president of SCP Auctions.

Through their research, SCP Auctions and Thorn concluded that “Laws of Base Ball” was written by Daniel Lucius “Doc” Adams in 1857. At the time, he was President of the New York Knickerbockers, a team founded by Alexander Cartwright in 1845. 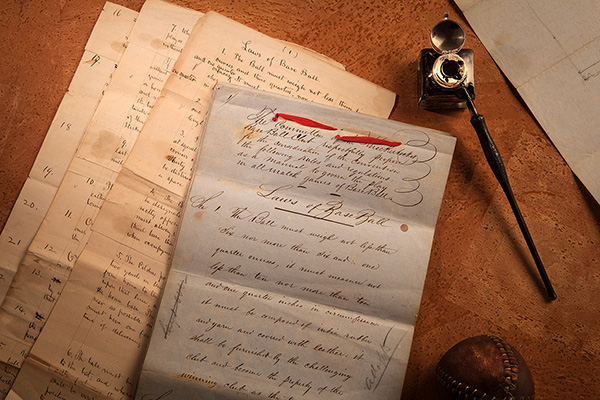 The Adams manuscript was used at a convention with 14 New York-area baseball teams to come up with a uniform set of rules for the game. It’s the first time that several key rules that have become the backbone for the game were noted. Among them were nine-player teams, 90-foot base paths, the nine-inning duration, and a distance for the pitcher’s mound from the plate. It also discouraged betting and players switching teams whenever they liked.

Cartwright has long been considered the founder of baseball, including in Cooperstown. But with the discovery of this document, Thorn disputes that now.

“When Doc Adams set to work in late 1856, none of these aspects of the game were settled,” Thorn said. “This was some seven years after Cartwright had left New York for Hawaii, never to return. For his role in making baseball the success it is, Doc Adams may now be counted as first among the Founding Fathers of Baseball.

“No earlier baseball manuscript of this significance has ever come onto the open market. In 1857, baseball made its great leap forward, and these are the documents that reveal what it was like to be present at the creation.”

As far as similar documents for other prominent sports, there have been  a couple of precedents in the last few years. In December, 2010, James Naismith’s original basketball rules went for $4.3 million. A few months later in August, 2011, soccer’s original rules went for $1.4 million.