Kristaps Porzingis: From Draft Day Boo Birds to the King of New York 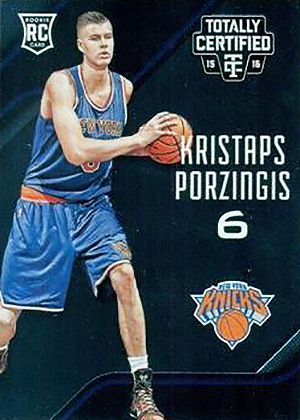 “He’s at least two years away from doing anything at an NBA level.”

Sports Illustrated made those comments following the New York Knicks’ controversial selection of Kristaps Porzingis with the number four pick in the 2015 draft. They also graded the Knicks’ decision to draft him a paltry C+.  Hindsight is a wonderful thing, especially when analyzing draft talent, but SI is surely regretting those comments now. In defense of the publication, they also mentioned that “if developed right (he) could be a franchise player,” though, few expected it to happen so quickly. Now in only his third year in the NBA, Porzingis has become the franchise player they touted and that many Knicks’ fans had prayed for.

It’s been a hell of a ride for Kristaps and the journey to stardom in the Big Apple hasn’t been without it’s bumps. Just how did he transform himself from a lightly framed international prospect, into the most revered player in the league’s toughest market?

Hoops Hype did an in-depth piece on Porzingis’ history with his former Liga ACB team, Sevilla in Spain. They talked to a number of his coaches who provided insight on the player Kristaps was at the time and the future ahead for him.

A fascinating story was revealed by a beloved Sevilla figure, Saturnina Gadea, who cleaned the team’s uniforms and lockers,

“If he found out that perhaps I needed something, he would offer to give some (money). He would be like ‘Take this money’ and I was like ‘How I’m (sic) going to take your money if you don’t have much money yourself, kid?”

Porzingis was actually one of the team’s lowest paid players due to his age and inexperience. Such an account reveals not only the humility of the youngster but also speaks volumes to the character of Porzingis as a whole. He may be in line for a huge payday in the near future but don’t expect that to change the Knicks’ superstar.

A key issue for Porzingis has always been his body. He was left off the Latvian Under-16 team due to his light frame and a few years later at a workout with Sevilla assistant coach, Rocky Jerana, a shocking discovery was made. Kristaps was taking shots but tiring quickly, too quickly for a man of his youth and relative health. That’s when the team’s doctors made the startling discovery that he had anemia, a disease caused by the blood having a lack of red blood cells (which contain oxygen). Within a month he was a new man, workouts were extended and his energy levels were at an all-time high. It’s shocking to think that such an affliction could affect such a young man but it goes to show that life throws plenty of unexpected punches our way.

The questions surrounding his frame were constant but never did his talent come into question. Former teammate, Ben Woodside said, “From that first day, I knew he had a great future and was going to be something special.” His talent combined with his work ethic was a winning combination, as stated by the general manger of Sevilla at the time, Jose Luis Galilea, “He stayed after practice for extra work every single day. He would be there with Nikola Radicevic to work on individual stuff, every single day without exception. When you have that attitude and talent, it’s hard not to succeed.”

By the time 2014 came around Porzingis and his camp were contemplating the decision on whether to declare for the 2014 draft. Current Knicks’ teammate and former Sevilla teammate, Willy Hernangomez discussed the mindset of his good friend at the time, “He felt he was too young. He knew he had potential, but he was not yet ready.” It takes maturity to make such a life-changing decision with such poise, especially due to the fact that he was drawing heavy interest from the Orlando Magic, who had the 12th pick at the time. Imagine where the Magic would be now with a talent like Porzingis? They’ve been searching for a franchise altering talent since Dwight Howard left all the way back in 2012.

The following are Porzingis’ per game stats for his final year (2014-15) in Sevilla before joining New York:

That block per game was good enough for 6th in the league and would be a continuing trend throughout his short NBA career.

For the next part of the article we’re going to look at the impact Porzingis has had on the NBA. Specifically, we’re going to delve into his ‘standout games’ and how he developed into the star he is today. For the purposes of this exercise a ‘standout’ game is one where Porzingis scores a minimum of 15 points and has ten rebounds or more. A high number of blocks is also taken into consideration. If he scores less than 20 points it has to be matched with at least ten rebounds.

Kristaps played a total of 72 games in his rookie season and 21 of those were ‘standouts’; a remarkable feat for a player of his youth. Per game he averaged: 14.3 points, 7.3 rebounds, 1.3 assists, 1.1 threes, 0.7 steals, and 1.9b blocks. The consistency earned him All-Rookie first team honours and he was third in scoring for rookies, second in rebounds and first in blocks. He had 21 double-doubles for the season as well. Outside of Karl-Anthony Towns he was the league’s best rookie. Despite the Knicks’ lack of success for the season (32-50) Porzingis was a shining light in an otherwise dull season.

Let’s take a look at the highlights of his sophomore season:

Porzingis showed extraordinary consistency in his second year. In half of his 66 games he scored 10 points or more and in 31 of them he recorded a block or more. He also had a lot of good stretches of hot form. Four times during the season he had three games (Games 5-7, 9-11, 30-32 and 63-65) in a row where he scored 20 points or more. He had 12 double-doubles in total to go with that. He had ten more ‘standout’ games (31) compared to his rookie season and his efficiency across the floor increased despite having a slightly lower usage rate. He improved his perimeter shooting by 2.4% and his effective field goal percentage went up by 4%. The dominance he began to show in his second season would roll into the early parts of the 2017-18 season where he’s made an astounding start.

In 13 games so far only two of the games Kristaps has played haven’t been ‘standouts’, take a look at the leap he’s already taken:

Porzingis has elevated himself into the MVP conversation on the basis of some outstanding play. He’s had his first 40 point night and another seven 30+ point performances. His numbers may have taken a jump but his minutes haven’t, they’ve actually stayed exactly the same at 32.8 per game. He’s currently 4th in the league for blocks per game, 3rd in points per game and 6th in player efficiency rating.

Tommy Beer on Twitter revealed that over the last 50 years, only three players, age 22 or younger, have averaged 30+ points per game through the first 10 games of the season. The other three were: Rick Barry (1966-67), Shaquille O’Neal (1994-95) and former teammate, Carmelo Anthony (2006-07), some illustrious company to say the least. He’s also become a more efficient player on the defensive end, averaging the least amount of fouls per game for his career with 2.5, compared to 3.7 last year and 2.8 in his rookie year.

Alongside Joel Embiid, Porzingis’ size and style of play is redefining the game of basketball. He’s no longer a unicorn, he’s become his own unique beast entirely.