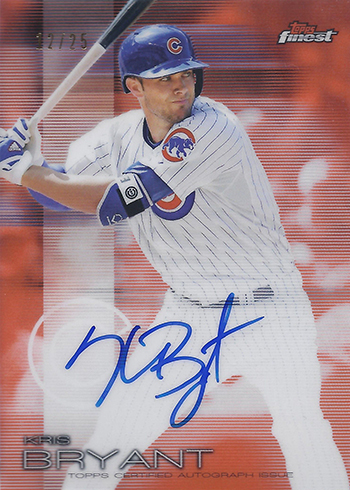 They’re probably still celebrating down at Wrigleyville and the endorsements for Kris Bryant are already coming in. The super star has signed an exclusive autograph deal with Topps.

The multi-year deal covers cards and kicks in starting with 2017 Topps Series 1 Baseball. Topps referred to the deal as their largest exclusive to date.

“Never has The Topps Company executed such a long-term deal with any athlete,” said David Leiner, Vice President and General Manager of North American Sports & Entertainment for Topps via press release. “Kris is one of the elite players currently in Major League Baseball and we look forward to working with him as his career continues to flourish.”

The agreement goes beyond just autographed cards, though. Bryant will grace the packaging for 2017 Topps Series 1. He’ll also be the cover athlete for the Bunt app next season.

It should also bode well for any outstanding redemptions for Kris Bryant cards.

This Article Won’t Tell You How to ...