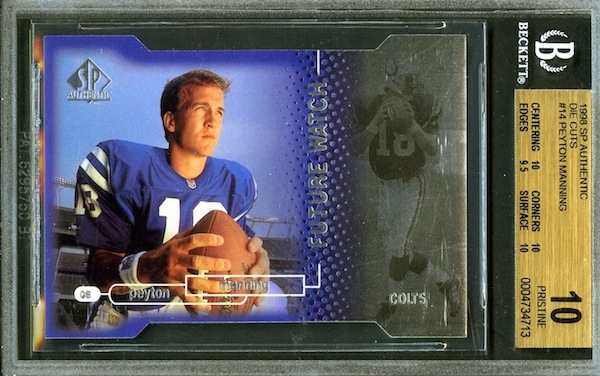 One of the greatest NFL quarterback’s greatest early cards is hitting the auction block.

A Pristine BGS 10 copy of Peyton Manning‘s 1998 SP Authentic Die Cuts card — one of only two cards to receive that grade — has hit the auction block via St. Louis-based Goodwin & Co. It’s a parallel of the future Hall of Famer’s top Upper Deck Rookie Card — and it’s limited to only 500 copies. The auction runs until Dec. 3.

Ungraded, the cards typically sell for as much as $800. This one is quite different with it being just a single .5 away from a perfect 10 grade.

“This card grade represents what Peyton Manning is all about — achieving perfection,” said Rob Springs, the Acquisitions Manager for Beckett Auctions. “This is an outstanding modern-day card of possibly the greatest quarterback to ever play the game and we are excited that it is a part of the Goodwin November auction.” 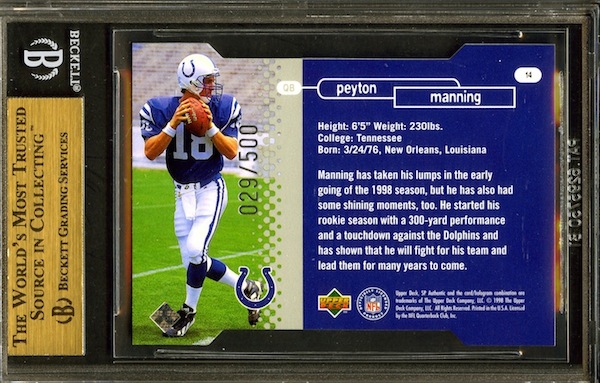 According to the Beckett Grading Services Population Report, there have been 227 copies submitted to BGS. The most-common grade is a 9.0 (82 copies), while there are 52 BGS 9.5s.

The challenges in finding a perfect grade for this one — and, again, only two have — are in the foilboard surface, which is then foil-stamped and diecut.

“While many collectors point to the 2000 Tom Brady SP rookie as a rival to Manning’s SP rookie, the difference is rarity,” reads the Goodwin auction listing. “While at least a dozen examples of Brady’s SP rookie have garnered the coveted Pristine 10 designation, only two of Manning’s SP rookies [exist].”

Goodwin estimates that the card could push $10,000. Lesser-grade copies of the card have been steady sellers in the last four years with more-plentiful Gem Mint BGS 9.5s and Gem Mint PSA 10s selling for as much as $2,005.

Top 5: Sting wrestling cards to own