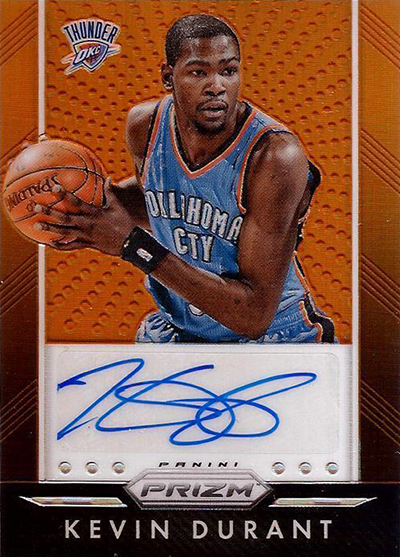 Kevin Durant has had an exclusive deal with Panini for several years already. Not only have the two sides opted to sign a new long-term deal, but Durant’s role appears to be growing.

Under the new long-term partnership, Panini products are the only place collectors will find Kevin Durant autographs and memorabilia cards. It also extends into other areas of marketing and business development. Durant will also act as a global spokesman for the company.

The announcement of the new deal comes at the same time that Panini launches a new ad campaign on TV, their first to feature just the Thunder star. These spots are slated to air on kid-friendly channels like Nickelodeon, Disney XD and Cartoon Network.

“Kevin Durant is one of the most recognizable professional athletes in the world but he transcends the game of basketball,” said Mark Warsop, Panini America CEO via press release. “The way he carries himself on and off the court is as inspirational to us as it is to millions of fans throughout the world. We’re proud to be entering this new exclusive relationship with Kevin and the Panini family and look forward to a bright future with him.”

“I’ve been proud to work with Panini for the past five years,” said Durant. “They’ve been a great partner in terms of overall support and creativity, and I’m really looking forward to expanding my role with our new commercial and by working with their product development team for years to come.”

Durant signed his first exclusive deal with Panini in 2011.