Arguably the most groundbreaking set of my generation was the release of Upper Deck in 1989. The hobby changed with that release and opened the door for other high end products like Leaf, Fleer Ultra, and Topps Stadium Club. It made the other companies step up their game in order to compete.But lost in the mysticism of 1989 Upper Deck, the follow-up set is probably as good, or better, than the initial release, when it comes to quality. However, there is one major difference in the two sets — the iconic 1989 Ken Griffey Jr. RC. 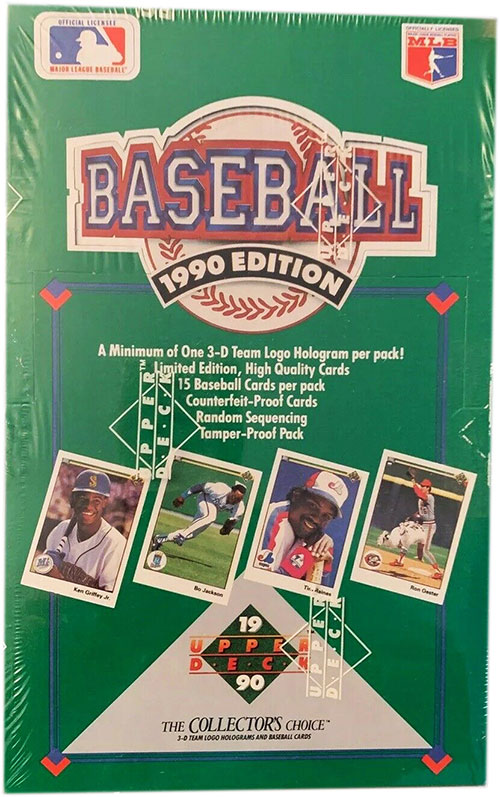 While the 1990 release doesn’t have the star power of 1989 with that beautiful Card #1, the release provides a collection of the best photos (and photo quality) of any set produced to date. Remember, this was one year before the inaugural release of Stadium Club, which took photos to yet another level.

In 1990, Fleer was rolling out a fairly bland design (which I actually like), Donruss was mired in Ketchup Red, and Topps was doing their best Saved by the Bell impersonation. Score was rebounding from a disappointing 1989 release, Bowman was correcting their oversized blunder from 1989 and there was one other high-end newcomer in 1990, Leaf Baseball. This would Upper Deck’s only real competitor in 1990 as far as quality goes. And one could argue that the combined popularity of 1989 Upper Deck and 1990 Leaf help make 1990 UD somewhat overlooked today.

There’s another big reason: the failure to include Frank Thomas in the rookie class was a tremendous miss on Upper Deck’s part. The inclusion of Ken Griffey Jr. in ’89 made the set unforgettable, but the absence of Thomas in ’90 is a big hurt.

Thomas was included in Topps, Leaf, Score, and Bowman while being in the Update set for Fleer. The only two sets to omit Thomas in 1990 were Donruss and Upper Deck. And both of those sets had all the major rookies the year before.

Even though 1990 Upper Deck Baseball is missing “The Big Hurt” (whose first Upper Deck release would appear in 1991), it makes up for that omission in other ways. The design is much like that of 1989 but instead of having the grass base path on the right side of the card, it ran across the top. Upper Deck would use the base path to cover from first to third over the first three years of releases.

The set itself was a rather large 800-card release. The Low Series makes up the first 700 cards while the update-style High Series rounds things out. A few of the major cards that are found in the High Series include David Justice (RC), Carlos Baerga (RC), and the Nolan Ryan 300 Win and accompanying error. A big card at the time was the Delino DeShields RC, but it doesn’t hold its prominence anymore. 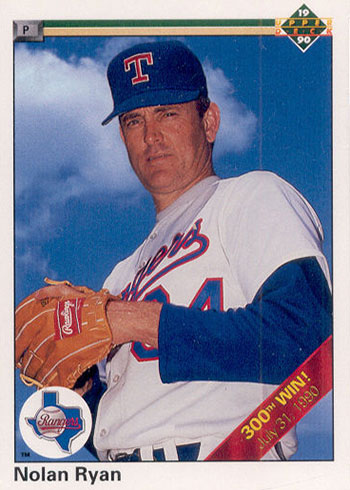 The other main rookies in the set could be found in the Low Series. These rookies include Hall of Famer Larry Walker, Sammy Sosa and John Olerud. But that’s just the start. Juan Gonzalez was a masher (434 HR, .295 lifetime average) and went on to have a really good career, mostly with Texas.

But the biggest rookie in the 1990 was Kevin Maas. The rookie first baseman for the New York Yankees burst onto the scene with 21 home runs in only 79 games. He broke multiple rookie home run records (quickest to 10 and 15) for the short time he played during the season and finished second in the American League Rookie of the Year voting. 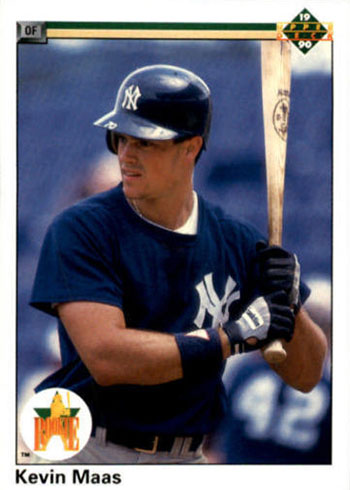 Now imagine that rookie class if the checklist had Frank Thomas!

Boxes come with 36 packs of 15 cards. As with 1989, each pack features a 3D Hologram Sticker. By 1990, I was over the “extras” that came in packs. Puzzles and stickers were fun when I was 10 but I was a teenager now and couldn’t be bothered with those frivolous inclusions. Though, admittedly, I did place a few Braves stickers on my notebooks at school.

Once again in 1990, Upper Deck touted the technology that it brought to the hobby in 1989. This included counterfeit-proof cards thanks to the UD Hologram on the back, tamper-proof packaging, and random sequencing. I still question the random sequencing because I found collation to be pretty predictable.

1990 Upper Deck Baseball unleashed one of the biggest baseball card innovations ever — autographs. Highlighting Reggie Jackson, the “Heroes of Baseball” set that originated in 1990 would be a hit over the next few years adding such legendary subjects such as Ted Williams, Mickey Mantle, Nolan Ryan and Ken Griffey Jr. The “Find the Reggie” started the autograph chase craze that has ultimately blossomed into the expectation that collectors have today. In 1990, there were 2,500 cards signed by Reggie Jackson. That’s a minuscule number based on estimated print runs in that era. Imagine stumbling across on a Reggie autograph today in an unopened box of 1990 Upper Deck High Series? Chances are, some are still out there waiting to be pulled. 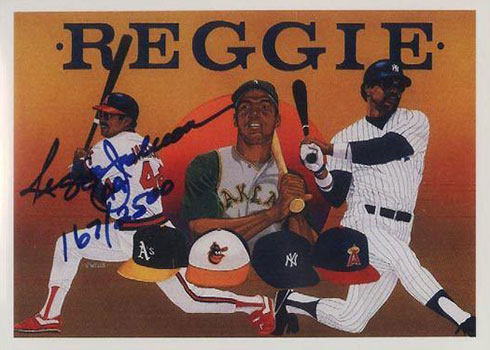 Though I never pulled a Reggie auto, I do have a particular attachment to the John Olerud RC. I was not able to pick up many packs of Upper Deck in 1989 thanks to the high price tag of $1.00 per pack. However, economics must have changed by 1990 because I remember getting several packs that year.

While not the same as Junior, the Olerud was a big pull for me on a youth trip with my church. I was 13-years old and spent a whopping $5 in a card shop in North Georgia, hoping to find some magic. That Olerud went to the top of my card list immediately and stayed there until I eventually pulled the Pat Listach 1992 Pinnacle RC. 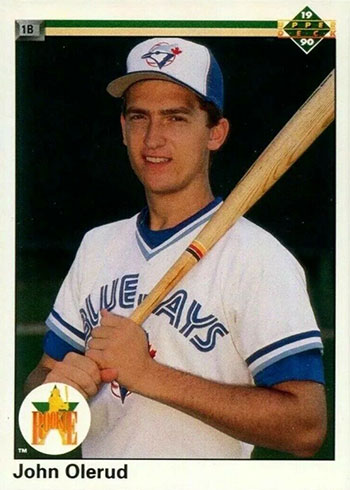 Photos are unbelievable in 1990 Upper Deck Base. They were crystal clear and feature players in action shots and profiles unrivaled by their competitors at the time.

Perhaps my favorite photo in the set is the Ken Griffey Jr. card. While not the iconic RC, the image captures what Griffey would become known for over the next several years. He has a huge smile and looks genuinely happy to be a baseball player. The back photo has that same big smile. 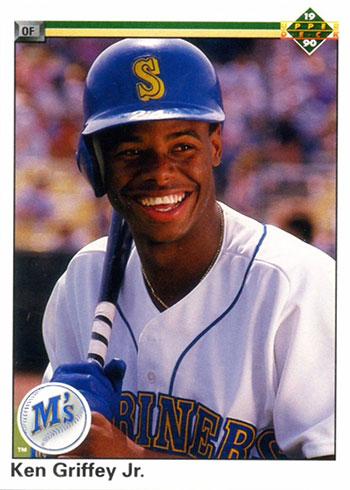 There was also the continuation of a full-length color photo on the back of the card. Stats aren’t a big focal point for Upper Deck but the sweet photo makes up for it.

Along with the rookies, the usual stars are included in the set. Nolan Ryan is featured with two major achievements. Besides the 300 Win Card in the High Series, he also has a nice base card and a 5,000 strikeouts card. 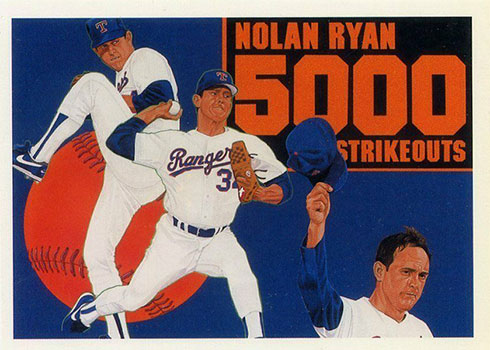 The “Collector’s Choice” artist renditions were a big hit for me in 1990. While Diamond Kings had been a hobby mainstay since the early ’80s, art cards were taking off in this time frame and I loved them all. 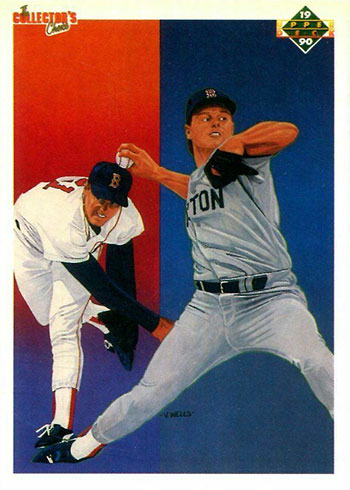 If I had to find one flaw in the set, aside from the omission of Thomas, it would be the thin card stock. This was not uncommon for 1990 releases, but the card stock for Upper Deck was almost paper thin. I always found that to be the one downside to an otherwise masterful design and release.

Sure, 1989 Upper Deck will always be the most memorable release of the Junk Wax Era. But that doesn’t mean 1990 isn’t a superb release. Little brother often has to defer to big brother and this is no different. But for my money, you can’t go wrong taking a trip down memory lane with 1990 Upper Deck Baseball.

Shop for 1990 Upper Deck Baseball on: