1990 Score Baseball wasn’t the company’s first set but it did come early in the company’s run. When Score burst onto the scene in 1988, it marked the first new licensed entry into the hobby since Donruss and Fleer in 1981. And they made a much bigger splash, from a visual perspective, than either of those sets from the early ’80s. In fact, it had be-come the most colorful set since 1975 Topps. Unfortunately, the inaugural set was plagued by a rough 1988 rookie class and is often overlooked with other sets from that season. 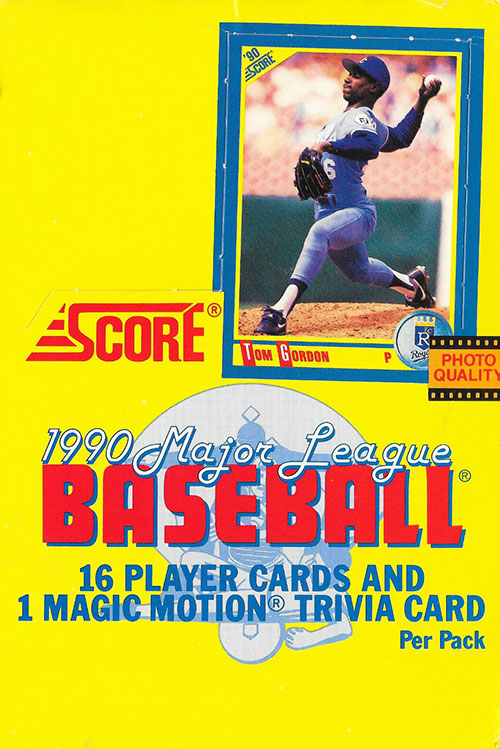 In 1989, Score went against the ’88 set’s beginnings and went to a white border, though there was still a good bit of color along inset borders. Even though 1989 had a much better rookie class, it has taken a backseat to 1988 in popularity over the years, mainly because the design was so boring.

In 1990, “colorful” was an understatement for several of the manufacturers. Donruss is known for the ketchup red design and Topps had some wild neon colors that were reminiscent of the intro credits for Saved by the Bell. In a weird twist, Fleer went back to a white border. Upper Deck was white border for the first several years of its existence. 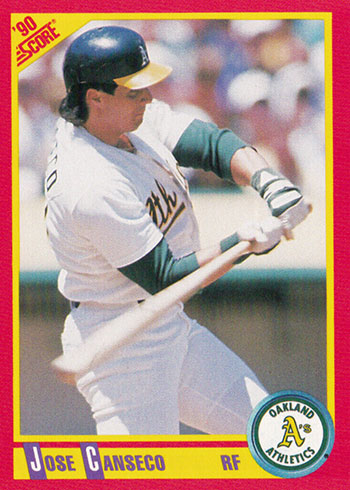 But no set that year captured the essence of the early ’90s quite like 1990 Score Baseball. The design for that release still catches my eye when I am sorting through my old card boxes and it brings back tremendous memories. The set was broken up into multiple colors with the main outside borders rotating between red, blue, green and white. The colors were deep, too. These weren’t the light colors of 1988 Score. These were eye-popping.

All of the colorful borders had an inset yellow border that framed the photo and created a backdrop for the nameplate. The ’90 Score logo was in the upper-left and the team logo was in the bottom-right. 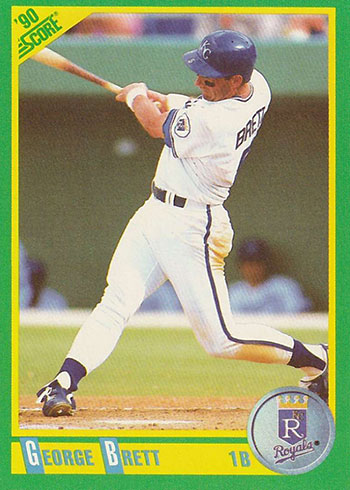 Regardless of the amount of stats available, the backs of the cards are busy. One thing Score really got right with backs was the large color photo. Though some other companies had started putting photos on the back, the photo on 1990 Score covered a large portion of the top half of the card. The small amount available on the right side of the photo just had the player bio information and the card number. 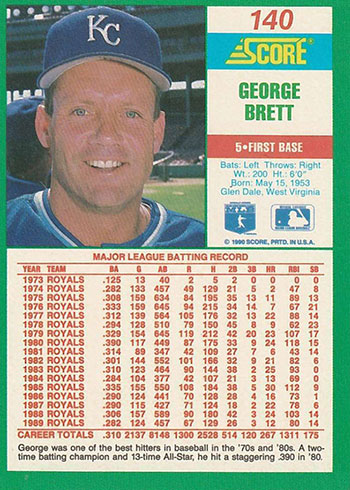 Below the photo was an area for the stats, which included all of the major categories. Below the stats, when available, there is a fairly descriptive bio on the player’s career and highlights. This is where you could find out interesting tidbits. Did you know that ten of Ken Griffey Jr.’s first 13 homers tied a game or put the Mariners ahead? And that he was Class A Player of the Year in 1988?

Modern sports card collectors have really gotten away from reading the backs of baseball cards.

The white border cards were reserved for Draft Picks, subsets and one very special card that I’ll get to.

Draft Pick backs feature a large color photo, this time covering over half of the card. There are no stat breakdowns. Instead, there is a nice bio on the player’s draft selection and how they fared in college or high school. 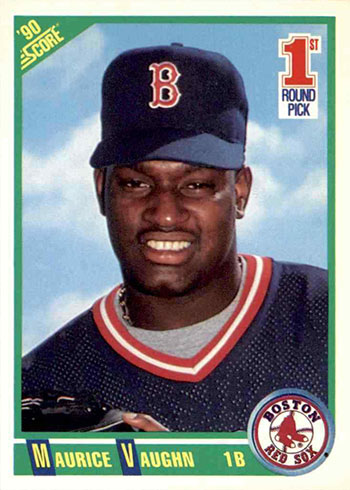 1990 Score Baseball introduced the Dream Team subset, though it would change over the years. This particular subset for 1990 was my least favorite. In 1991, they really nailed the subset with the photography and design. In ’90, the cards looked somewhat airbrushed and had the players posed in front of a colorful background. Dream Team was listed on the back in old carnival style lettering. 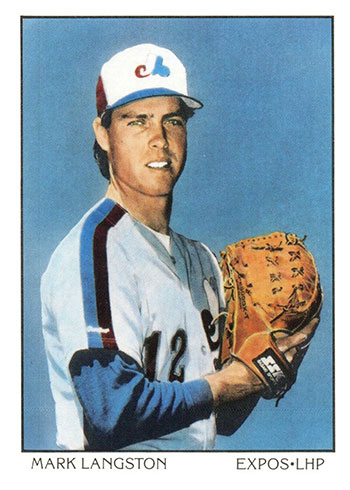 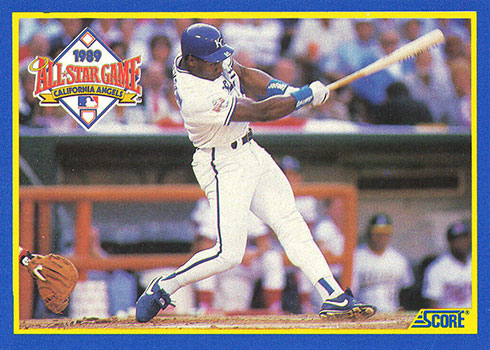 Four additional cards cover the 1989 World Series between the Oakland A’s and San Francisco Giants. Card 700 covered Games 1 and 2 of the Series. “Lights Out: Candlestick”, #701 – detailed the earthquake that struck during Game 3. Card 702 covered the Game 3 wrap-up and Card 703 was the Game 4 wrap-up. 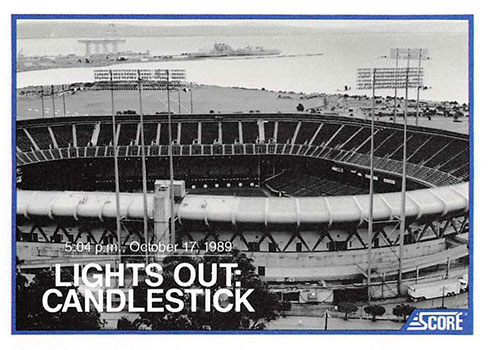 The remaining non-base cards are highlights that feature players such as Nolan Ryan and Rickey Henderson, documenting feats they accomplished during the 1989 season. 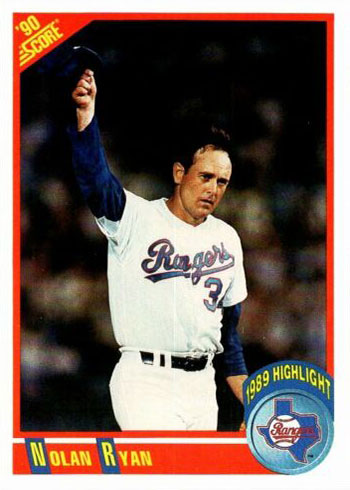 Though 1989 had Ken Griffey Jr., Randy Johnson, Craig Biggio and several others among the rookie class, 1990 had a very strong class, too, both at the time of release and in retrospect. Frank Thomas headlines. Other rookies in the class were Juan Gonzalez, Robin Ventura, Sammy Sosa, Bernie Williams, Dave Justice, Larry Walker, Chuck Knoblauch and Tino Martinez. 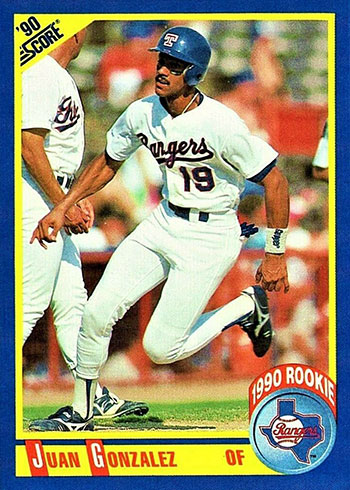 There was also one well-known error card of Ken Griffey Sr., with the jersey number on the back of the card being 30 on the corrected version and 25 on the error. Unfortunately, over the course of time, neither of these cards has turned out to be valuable. But true error cards in the Junk Wax Era were always fun to chase. They were some of the cards that landed in the binder and penny sleeves. 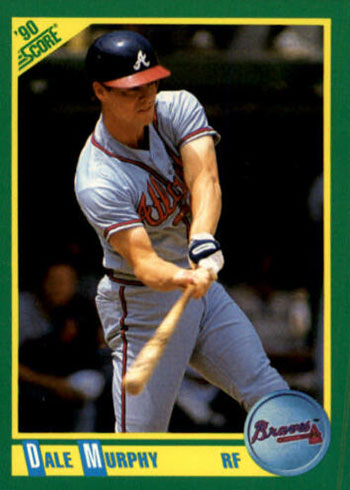 The best reason to take a look at 1990 Score may not be the Frank Thomas or Larry Walker RCs. The prize is #697 — Bo Jackson wearing shoulder pads and holding a bat across his back. I still get chills when I pull this card from a pack. They aren’t very easy to find but when you get one, you remember it. While the 1989 Upper Deck Ken Griffey Jr. may be the most iconic card from the Junk Wax Era, I would put this Bo in the Top 3, without question. 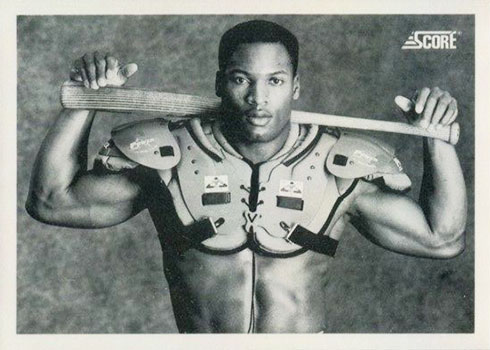 The packaging for 1990 Score was the tried and true plastic baggy that had worked in 1988 and 1989. And again, Score advertised “Photo Quality” on the packs. I know what they were going for but simply saying “Photo Quality” never made sense to me. The packs consisted of 16 cards and one Magic Motion Trivia Card. Every company was coming up with their own unique “extra” with their packaging and the Magic Motion card never really excited me. 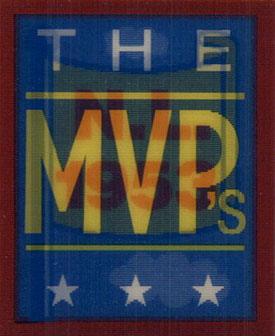 The base set has a total of 704 cards and was all combined into one series, which would change over time. Each box includes 36 packs per, giving you a chance to build 576 cards of the set, provided there were no duplicates. But let’s be honest, collation in 1990 was not the best.

Today, boxes are around $5-$10 and the checklist is certainly worth that small price tag.

Even though the set, as a whole, can be daunting for one series, I always enjoy a rip of 1990 Score Baseball. Whether it’s the Frank Thomas RC, Bo Jackson two-sport Card, or even the World Series highlights, there is something for everybody when it comes to nostalgic collecting. And with a sticker price of less than many packs today, a box is worth the time.