As a sports card collector reading this, I likely already know the answer to the following question: What is the first thing you think of when I mention “wood grain?” If your answer was anything other 1987 Topps Baseball, welcome to the world of baseball cards! I’m happy that you chose this article to be your first foray into hobby reading.

Of course, to really appreciate the wood grain design of 1987 Topps Baseball, you have to consider the era itself. Sure, the border looks like a baseball bat, and that’s what they were going for. But, faux and real wood grain were all the rage in the mid ’80s. So what (surely) started as an homage to the baseball bat has become a cultural icon that fits perfectly in its time period.

Just take a glimpse at this photo of me and my family in the ’80s. The walls were wood paneling. The couch, which is probably one of only two designs made during that time period, was trimmed in wood. (The other couch design, by the way, was the amazing wagon wheel and covered bridge, which we also owned.) 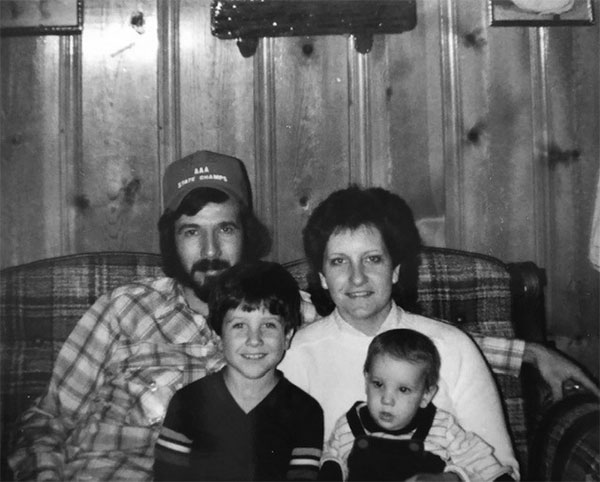 The clock above our heads was a glazed, wooden, stump of a timepiece. I’m not even convinced that my dad’s shirt wasn’t made of wood grain in some way. My neighbor had the station wagon with the wood grain siding, made famous in National Lampoon’s Vacation. Believe me when I tell you, wood grain was the “chevron motif” of the mid-’80s.

Topps had not been afraid to stray from the standard white border over the previous 30-plus years as they went with the burlap of 1968, gray of 1970, black of 1971 and the rainbow colors of 1975. There was even a wood grain predecessor in 1962. But when they stepped out in 1987, they broke the mold for how baseball card designs would be viewed over the next three decades.

Anyone with a pulse in the late 1990s was aware of the 1987 Topps Baseball card. It was a cultural phenomenon that has stood the test of time. Today, you either love it or you hate it but you are almost certainly not indifferent about the set. I fall into the love category with this one mainly because of the cultural significance it has. 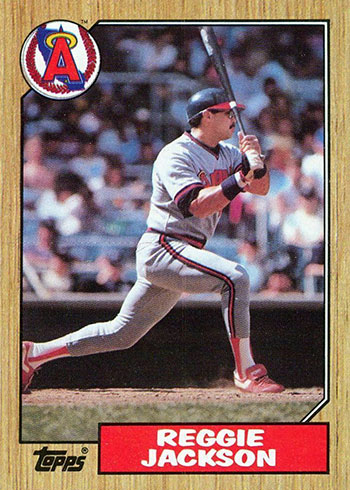 I was 10-years old in 1987 and my memory always goes back to that set when I smell cardboard or dusty gum. That set is burned into my psyche and when I talk with people who may have collected as kids, but drifted away from the hobby, the conversation almost always leads back to that set in some form or fashion.

Aside from the unforgettable wood grain design, the backs are also immediately recognizable, though that can be said for several Topps releases. The blue and yellow really matched up well with the fronts and was very easy to read. And the backs of these cards held some of the most inane factoids ever to be found on the back of a baseball card. Enter Moose Haas, Amateur Magician and Certified Locksmith. 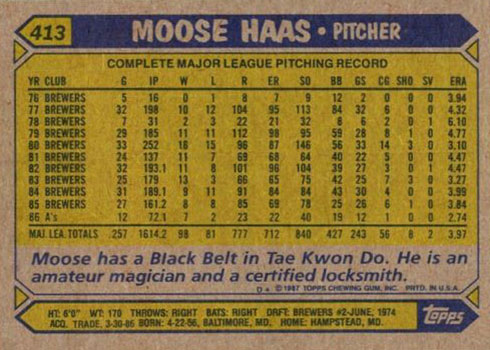 The set itself was large for today but fit right in with the sets from the ’80s with 792 cards and featured almost all of the biggest stars of my generation. There aren’t a lot of different inserts in the set, but Record Breakers, All-Stars, and Turn Back the Clock were typical Topps fare.

The packs are also quite memorable with the green, yellow, and red color combination on traditional wax wrappers. Topps used that flashy baseball design for several consecutive years and it always takes me back. I’ve often wondered if anyone ever won that trip to 1988 Spring Training. 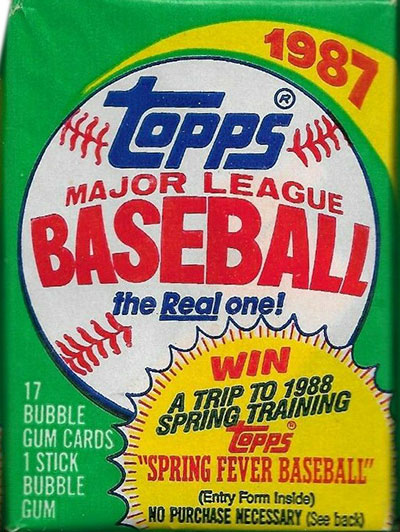 The box was graced by Dave Righetti of the New York Yankees. There was also Topps’ swipe at their competition with the slogan, “The Real One” – a brand slogan for years. I tell you, that 40 cents per-pack price tag looks good, too! 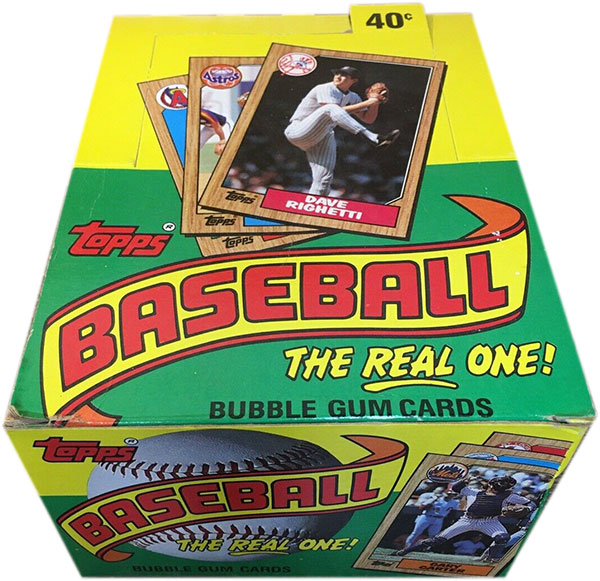 Then there were cards on the box! I loved when boxes had their very own cards on the bottom. But Topps had theirs on the side panels in 1987. I had the great Rickey Henderson and Jim Rice on my most recent box. I have never been very good at cutting these out though. I tend to wind up with some BGS 3’s every time I try.

While Topps didn’t clearly identify rookies in the set, they did provide one of the sweetest subsets of the Junk Wax Era, “Future Stars.” These were easily recognizable with the rainbow colored swoosh at the bottom of the card. The Bo Jackson has always been the most sought after “Future Star” of the era in my opinion, other than, maybe, the 1989 Gregg Jefferies. 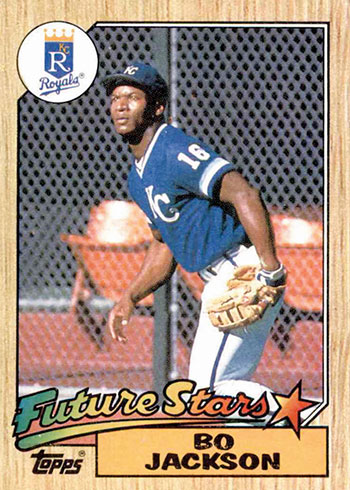 Although they are not all identified on card by a RC logo or included in the “Future Star” checklist, there are several huge rookies in the set. Barry Bonds, Jose Canseco, Will Clark and the aforementioned Bo Jackson had their first Topps cards appear in the 1986 Topps Traded set but from a base-set standpoint, 1987 was their first. Canseco even got the “All-Star Rookie Cup” treatment. 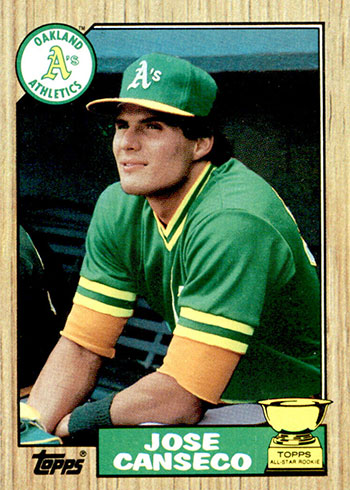 Other rookies included Barry Larkin, Mike Greenwell, Doug Drabek, and Rafael Palmiero. When it came to the Reds, I was a big Eric Davis fan back in the late ’80s, but Barry Larkin was a close second to Ozzie Smith as my favorite middle infielder. 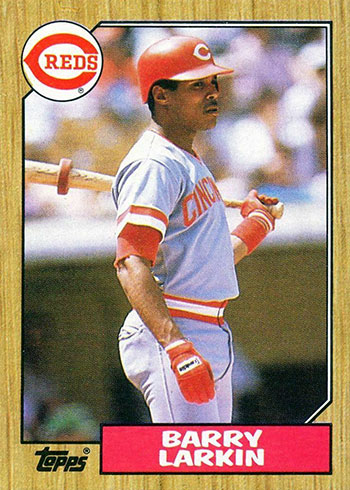 Then there is the Mark McGwire. Is it a rookie? No. But it’s still an iconic card. His first appearance in flagship, of course, was in 1985 Topps. 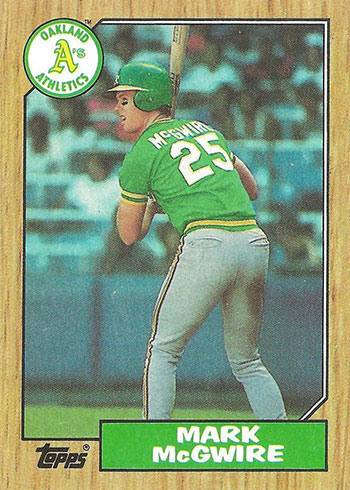 How about some veteran stars? Pete Rose was included as a manager and a player! 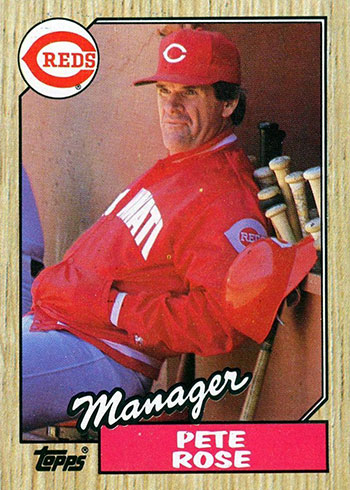 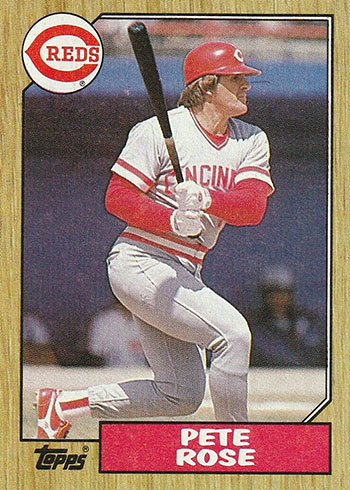 While I always loved Tony Gwynn, this card wasn’t my favorite of him. He shows him from behind and you can’t see his face or the name of the back of his jersey. My opinion: I think one of those two things is necessary for a good baseball card. 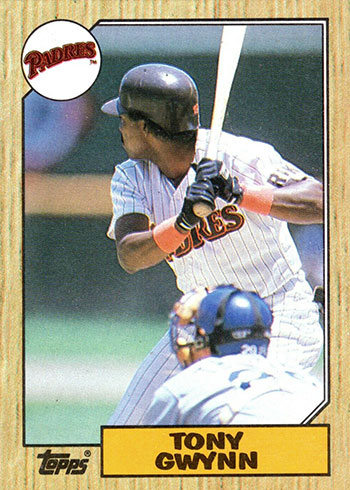 Andre Dawson was another big part of those late 80’s Cubs teams that I rooted for. But in 1987, he was still a member of the Montreal Expos. It is really hard to beat those old Expos uniforms. 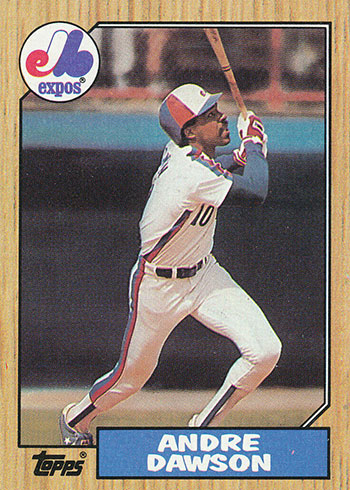 I was a middle infielder when I played Little League ball, so I paid pretty close attention to those guys. I grew up on TBS and WGN so the Cubs were basically my adopted second team behind the Atlanta Braves. If Ozzie is 1 and Barry Larkin is 2, then Ryne Sandberg has to be 3 for me. 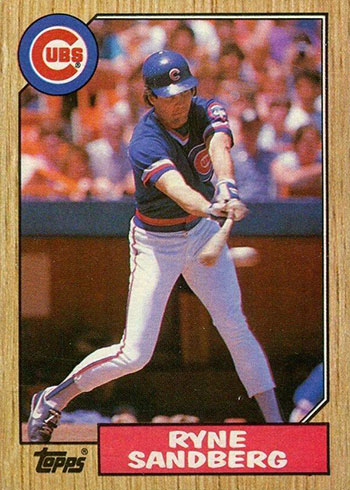 My favorite player for the hometown Braves at the time was Dale Murphy. Ron Gant wouldn’t be a rookie until 1988, so Murphy was my guy until then. 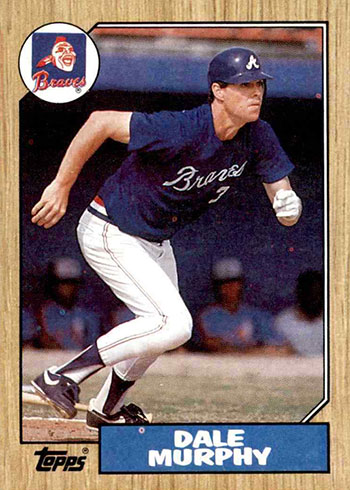 Which, finally, brings me to the gum. Gum and baseball cards belong together. The inclusion of gum tapered off in the early 1990s and all we were left with was Big League Chew to get our rapidly flavor-losing gum fix. Though gum was a staple throughout the vintage and Junk Wax Era, it puts the cherry on top of the 1987 set. Obviously, I don’t eat the gum now and suggest you avoid that temptation as well. But that smell of gum and cardboard mix perfectly with the design.

A piece of cardboard with wood grain borders sums up childhood in the ’80s. There was shag carpet, Atari, Transformers, Larry Bird and Magic Johnson, and 1987 Topps. You can’t have any of those without thinking about the others.

Many collectors have chosen 1987 Topps as their “set build” and I can’t blame any of them. It’s such an iconic set to own and it’s loaded with stars. The design was so hot and popular, Topps goes back to it quite often with their reprints and throwback inserts. 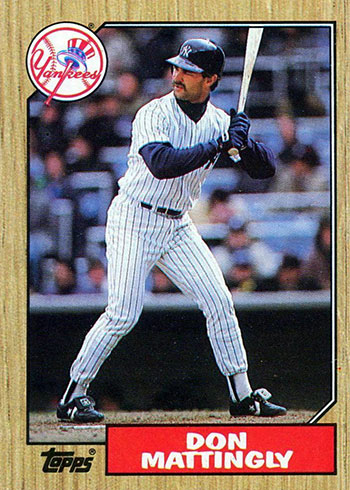 1987 Topps is what a baseball card should be. It’s cultural, it’s representative of the time period, it has a great mix of rookies and veterans, and it can still be found at a reasonable price. When I really think about baseball cards, I go back to my youth.

This is the icon! This is Michael Jordan! This is Super Mario Brothers! This is Seinfeld! This is the Metallica Black Album! It just does not get any better.