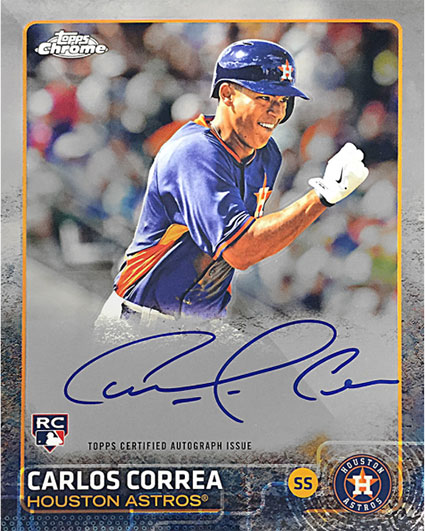 When Carlos Correa signed an autograph deal with Topps, he wasn’t the first to do so. Good or bad, autograph exclusives have been around for a long time now.

However, what made Correa’s deal different — at least for Topps — is that it branched beyond just cards and into memorabilia as well. The Astros rookie is the first player to strike such a deal with the card maker.

The deal came too late to get Correa’s signature in packs of 2015 Topps Chrome Baseball. However, leveraging the autograph deal, an over-sized version of his rookie card is now available on Topps’ website.

The 2015 Topps Chrome Jumbo Autograph Carlos Correa card measures 8 x 10. It’s printed on stock similar to the regular 2015 Topps Chrome Baseball set. It also comes with a thumbs up from MLB-trained authenticators and a tamper-proof hologram.

That’s not cheap, but it is less than what his autograph in the recently released 2015 Topps Heritage High Number Baseball is going for. 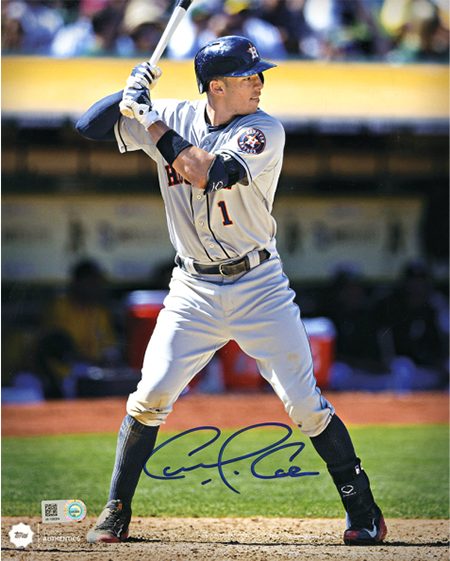 As for the regular-sized 2015 Topps Chrome Baseball Carlos Correa autographs, we may see one at some point as Topps showed a picture of the shortstop holding a signed Superfractor on their Instagram page.

#CarlosCorrea with his 2015 #Topps #Chrome #Autographed #RookieCard … #SuperFractor What should we do with it? What product should we put it in? #mlb #baseball #houston #astros #gem #risingstar