2017 Topps Star Wars Journey to the Last Jedi Autographs Include Big Names, Debuts and the Return of a Jedi 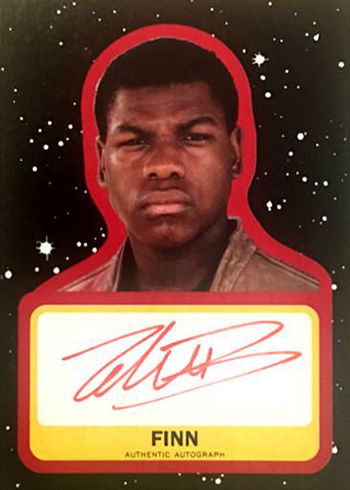 The set also includes a notable signature debut as far as Star Wars trading cards go and the return of a tough autograph that has been seen in the hobby just once before.

A total of 63 different signers are in 2017 Topps Star Wars Journey to the Last Jedi.Topps announced the list of signers on their Star Wars Facebook page.

The set is a primer for the upcoming eighth episode. So, as a tease, the set draws from the many other parts of the ever-expanding saga.

Many of the biggest names like Ford, Hamill, Fisher and Ridley have been in several sets, albeit usually in small quantities. One name that has been seen in a while is Hayden Christensen. His lone autograph card prior to Journey to the Last Jedi came back in 2006’s Star Wars Evolution Update. The Canadian actor, who played Anakin in Attack of the Clones and Revenge of the Sith appears to be back in the Topps fold, having also been announced for the upcoming 2017 Topps Star Wars Masterwork and 2017 Topps Star Wars Stellar Signatures.

Gwendoline Christie (Captain Phasma in The Force Awakens) is appearing on a Star Wars autograph card for the first time. She has signed in the past for Rittenhouse Archives’ Game of Thrones products.

At least one autograph is promised in each hobby box.