The Jose Altuve Rookie Card roster is a simple one. It might very well be one of the most overlooked in baseball. 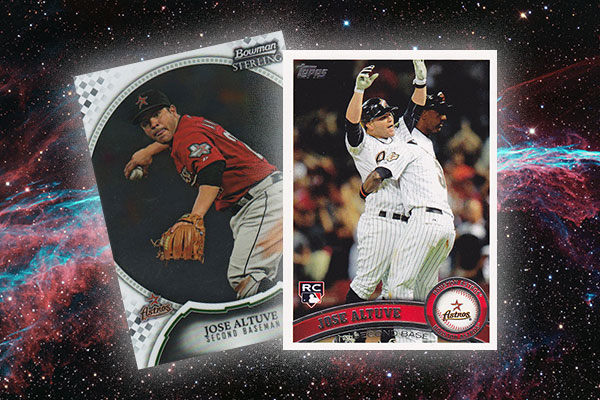 At a time when players usually have cards in dozens of sets before they arrive in the bigs, Altuve is in just a couple. And as for the Rookie Cards themselves, the Astros second baseman has just four.

None are serial-numbered ultra rarities (although some are more common than others). None are autographed. They don’t have pieces of memorabilia embedded in them.

Except for parallels, the Jose Altuve Rookie Card checklist are the closest thing to “traditional” for those who grew up collecting before the number of sets each year were in the dozens.

Make no doubt about it, Altuve is one of the best players in baseball today. He might not hit a lot of home runs (some games are exceptions). But not all of the greats do. Altuve is more of a spark plug for a Houston roster that is deep on great hitters.

Over the past couple of years, Jose Altuve Rookie Cards have started to see some upward movement in value and interest. However, even then they’re still much less than a lot of other current stars and top prospects.

A couple of different factors are likely in play here. The big one is that no Jose Altuve Rookie Card is particularly rare. He doesn’t have that big one everyone chases. And there’s no Bowman Chrome autograph that came before them.

As mentioned, Altuve’s play isn’t as splashy as a lot of other hobby favorites. Home run hitters rule the hobby. Character players take more time to gain top-tier appreciation. Look at Tony Gwynn and Kirby Puckett as examples of that.

But Altuve’s on the right path. He’s put together enough great seasons to show that he’s not a fluke or the baseball equivalent of a one-hit wonder. He’s also the leader on a team contending for a championship. Should a World Series come to Houston, the days of Jose Altuve cards being overlooked could come to an end.

Unlike most modern players, Jose Altuve doesn’t have a lot of minor league and prospect cards. In fact, he has very few.

The 2008 Greenville Astros Choice Jose Altuve is his first card. Like a lot of minor league issues, this one is legitimately tough to find given the fact that it was primarily available locally. 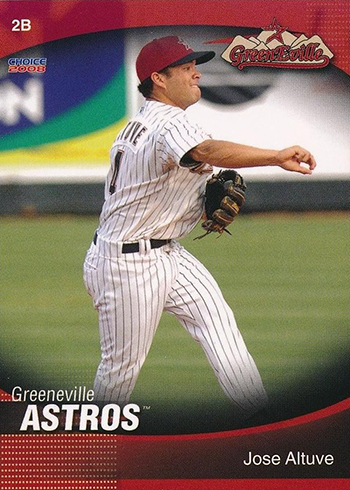 Altuve’s next card is in the 2009 Greenville Astros Grandstand set. Again, this is another tough card.

His Bowman debut didn’t come until 2010 Bowman Chrome. But this is just a regular Prospect insert. 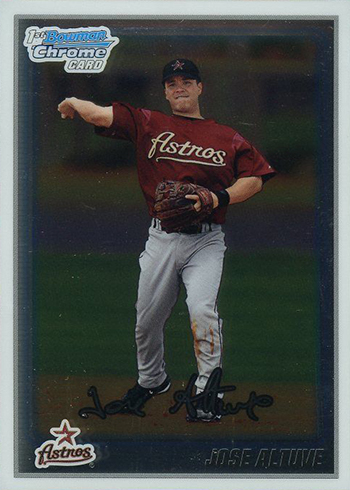 There is no Bowman Chrome Just Altuve autograph from his years leading up to the majors. In fact, the first certified Jose Altuve autograph cards with him in a MLB uniform didn’t come out until 2012.

The 2010 Bowman Chrome Jose Altuve does have a fairly large Refractor rainbow to go with it, though.

It’s important to note that a “2008 Rookie Phenoms” card is floating around on eBay. This doesn’t appear to be an official card or one that’s licensed. Rather, it’s likely to be a homemade card that shouldn’t carry any real value or be treated as official.

The following is a list of Jose Altuve Rookie Cards as noted in the Beckett Baseball Card Database and Price Guide with the RC tag. Inserts and parallels are not included. Rankings are based on book value. Exact values are available to price guide subscribers.

Bowman used to be the “Home of the Rookie Card.” Today it’s home to the prospect autograph. So when it comes to actual Rookie Cards now, they’re generally some of the cheapest out there because the attention is elsewhere. Such is the case with the 2011 Bowman Draft Jose Altuve, his least valuable Rookie Card.

It comes with a similar thin stock like Topps Update, but the brand doesn’t have nearly the history as flagship Topps for cards like this. It also lacks the pop of the slightly more coveted Bowman Chrome version. 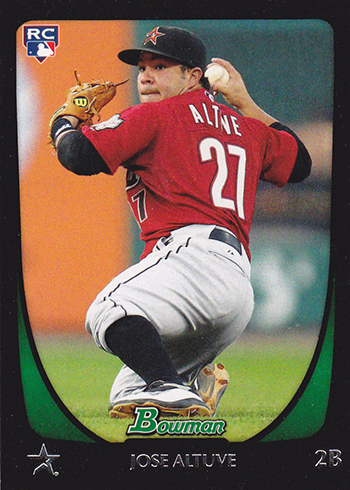 The only major difference between the 2011 Bowman Chrome Jose Altuve and the regular Bowman version is the card stock. This one is more sturdy and comes with the trademark chromium shine.

The two cards were even packaged together in 2011 Bowman Draft packs and boxes.

Lots of these cards are available, again partially overshadowed by the fact that modern Bowman Chrome is more about the autographs and prospects versus the actual rookies. The fact that Altuve has a 2010 Bowman Chrome card, albeit a Prospect insert, also plays a role. 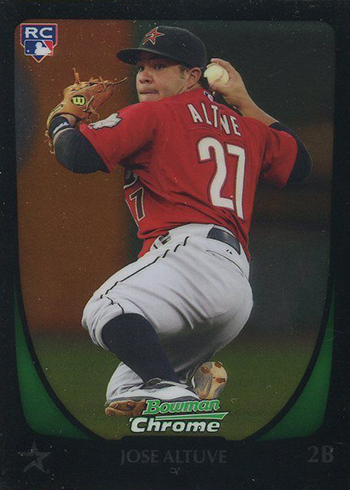 2011 Topps Update Baseball may not have the most valuable Jose Altuve Rookie Card, but it might be the most iconic. It’s part of a now-classic set that has several other big-name RCs like Paul Goldschmidt and Anthony Rizzo. That Mike Trout is pretty good, too.

Recently, a handful of flagship Topps Rookie Cards have started to make significant gains in value, especially in Topps Update where the print run is generally lower than Series 1 and Series 2. Mike Trout is the leader in this regard, but the 2008 Clayton Kershaw and 2012 Bryce Harper are also commanding significant amounts. So this may be one to keep an eye on.

The 2011 Topps Update Jose Altuve has a lot of parallels. In honor of their 60th anniversary in baseball, some of these are diamond-themed, adding a lot of pop. The retail exclusives from Target and Walmart aren’t numbered but they’re fairly tough to find. 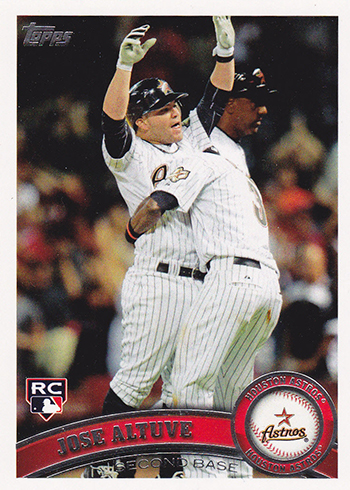 The 2011 Bowman Sterling Jose Altuve Rookie Card is the one that costs the most. Coming from the premium Bowman line, Sterling stressed bulk autographs over base cards, though. Being a premium line, the print run isn’t as big as the couple of other 2011 sets Altuve is in. At the same time, this isn’t exactly a scarce card, either.

While the base version doesn’t boast a serial number, all of the parallels do. Like Bowman Chrome Draft, they’re Refractors with the exception of the Printing Plates.

Without a Jose Altuve Bowman Chrome autograph, this is the closest thing that collectors have to something high-end. This may be one of the big reasons why this continues to be the most valuable Jose Altuve Rookie Card, still significant outpacing Topps Update.

It’s by no means cheap, but when you look at what some prospects fetch that have yet to make the majors, even the cost of the 2011 Bowman Sterling Jose Altuve Rookie Card seems more reasonable. 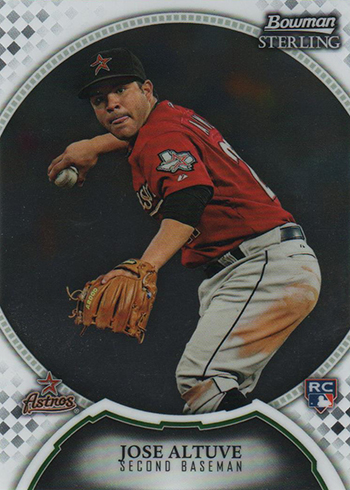