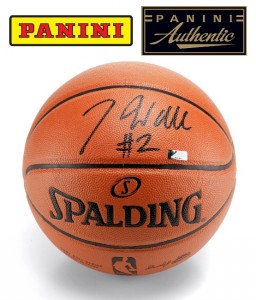 One of the hottest names in the NBA has found a new home as Panini America has just announced that Washington Wizards guard John Wall has signed an exclusive multi-year deal with the company that covers trading cards, autographs and memorabilia.

This agreement is sure to pay off nicely for collectors in the near future as the former first overall pick from the 2010 NBA Draft continues to make himself one of the hottest stars in the game. For the first two seasons of his career, Wall was under an exclusive deal with Panini and the company is happy to see him return.

“John Wall is one of the most exciting young players in the NBA and we’ve been fortunate to work with him in the past; having a player of John’s stature return to our team in such a meaningful way not only adds more excitement and potential to our product offerings, it also reinforces our long-term commitment to the NBA category,” remarked Panini America CEO Mark Warsop in a statement issued late this afternoon. 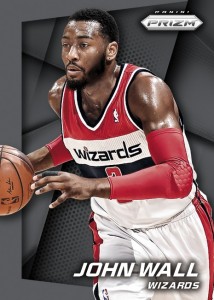 Wall also offered his thoughts about rejoining the company in the press release.

“Panini America is a true innovator in the trading card arena; I know that firsthand,” he said. “I’ve always enjoyed working with them and I am thrilled to be back on Team Panini exclusively.”

Panini’s team of exclusive spokesmen has grown by leaps and bounds over the past few years and Wall will be joining a talented group that includes Kobe Bryant,  Kevin Durant, Blake Griffin and Kyrie Irving.

Now in his fifth season with the Wizards, the market for Wall’s cards has continually shown strength and growth. Last year, he paced the NBA in assists and appeared in his first NBA All-Star Game. After nine contests in 2014-15, he was averaging 19.4 points per game and his six double-doubles helped Washington to a strong 7-2 start.