A named that got attention from the NFL Combine was Jadeveon Clowney.

Clowney, a defensive end at South Carolina, ran the 40-yard dash in 4.53 seconds, and weighs 266 pounds – a time unheard of at his weight.

Large amounts of news coverage from the Combine was devoted to him, and a number of mock drafts have him going to the Houston Texans who have the first overall pick in the 2014 NFL Draft.

Clowney’s first autographed cards appeared on the market today with the release of 2014 Leaf Metal Draft. His big, sweeping autograph fills more than the space provided by Leaf.

Of note: they are also on-card autographs.

The first several of his autos, including parallels and inserts such as Award Winners are up on eBay with prices ranging between $109-$199 (or best offer).

Clowney isn’t the only one getting attention from Leaf Metal Draft. The set includes autographs from quarterbacks Johnny Manziel, where the cheapest Buy It Now price if $199, Teddy Bridgewater and A.J. McCarron. 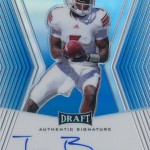 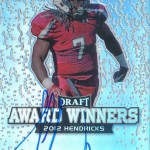 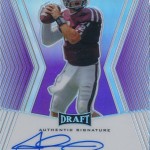 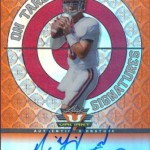