His name might not be Zion, but Ja Morant is likely to be one of the top picks in the 2019 NBA Draft. No matter where the young point guard ends up, he will be a big part of Panini’s plans in the years ahead. Morant has signed an exclusive deal with Panini America covering both trading cards and memorabilia. 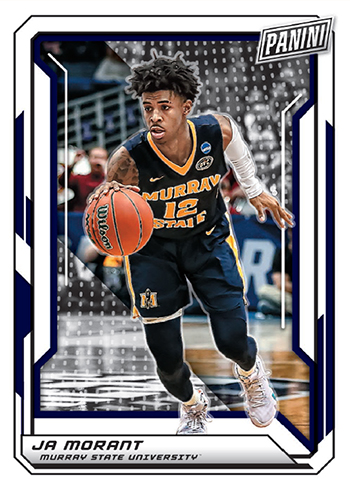 As a sophomore in 2018-19, Morant averaged 24.5 points and ten assists per game for the Murray State Racers. He was a consensus first team All-American and won the Bob Cousy Award as the NCAA’s top point guard.

He might not go fist overall, but Morant is still projected to go high in the draft on June 20.

The first Ja Morant Panini cards will arrive almost immediately after Adam Silver greets him at the draft. Panini Instant will have special print-on-demand cards. Slated for August, 2019 Panini Contenders Draft Picks Basketball will have his first in-pack cards. 2019-20 NBA Hoops, which arrives in October, will be his first traditional NBA product.

Panini Authentic signed memorabilia will be available on Panini’s website in the days following the draft.

Highs and Lows of the May Basketball ...