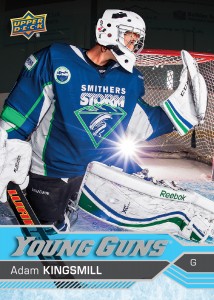 Upper Deck has been producing cards featuring some of the most incredible athletes in the world through its Heroic Inspirations program and another promising talent named Adam Kingsmill has been recognized by the company.

The 16-year-old native of British Columbia lost his right leg in an accident when he was a toddler, but it has not stopped the young goalie from protecting the net for the Smithers Storm. Last night, he was the guest of honor before the Vancouver Canucks took on the Dallas Stars and was presented with an over-sized copy of his Young Guns card by fellow netminders Ryan Miller and Jacob Markstrom. 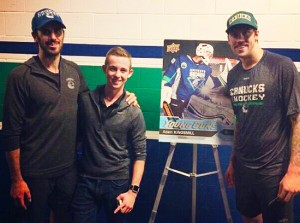 Upper Deck’s Senior Marketing Manager, Chris Carlin, spoke to Beckett Hockey about why it was important for the company to honor Kingsmill with his own card.

“When we first heard about Adam Kingsmill’s story of overcoming tremendous adversity to do what he loves, we were blown away,” he said. “People like Adam are the reason why we started our Heroic Inspirations program and it is our hope that by shining a light on his achievements, we can help inspire other youngsters dealing with similar issues to overcome them. Adam is certainly deserving of having his own Upper Deck card and we found it apropos that he should have a Young Guns rookie card out at the same time as other young stars in our 2016-17 NHL Upper Deck Series One product which released last week. Upper Deck would like to thank the Vancouver Canucks for treating Adam and his family to such a wonderful experience and making the evening so special for them.”

Upper Deck has noted that several hundred copies of the card were produced and given to the Kingsmill family to distribute. The company and the family are also working to find a charity that helps kids that are dealing with amputations. Needless to say, his story certainly serves as an inspiration for hockey fans everywhere.

Beckett Media and Maple Leafs from the ...