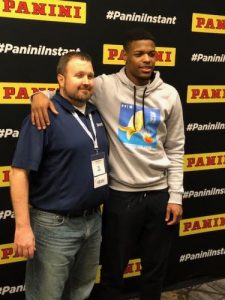 After a thrilling win by the Dallas Mavericks to close out Day 1 of the Industry Summit, attendees were moving in to high gear on Day 2 (Feb. 27). The early morning was ushered in by a Welcome from GTS at 7am in the GTS Conference Room.

The Keynote Address began at 8:15 and featured guest speaker, Randy Nelson, a leading business coach and an Amazon best-selling author. Mr. Nelson discussed his book, The Second Decision: The Qualified Entrepreneur, and the business aspect of building and maintaining a successful business in the Hobby Industry. The session covered many topics that included Core Values, Core Purpose, Vision, Execution, and being productive vs. being busy. Mr. Nelson also provided each attendee with a copy of his book.

Next up was the Soccer Selling Panel, where shop owners and breakers learned what innovations to expect in the near future and also discussed tips on presenting the Soccer product to collectors. After the Soccer Selling Panel, the stage was turned over to Steve Grad (Beckett Authentication Services), Brian Gray (Leaf) and Dave Amerman (Steiner) for the Summit Authentication Panel. The discussion touched on numerous topics, from autopen to Lonzo Ball to Ben Affleck autograph variances, to the quest for finding something new for customers and other tips to navigate the autograph world.

The Panini NBA Development Team entertained attendees during the Panini Meet n’ Greet – Basketball. David Porter, Director of the Product Development Team, discussed the state of basketball cards and fielded questions about the points system, the 2017 NBA Photo Shoot, allocations, system upgrades and much more. He also discussed some exciting new products that are expected in 2018. One of the improvements made in the basketball product this year was the increase in the Live Auto Rate from 91% to 97.4% from the previous year.

Panini remained in the spotlight for Meet n’ Greet – Baseball & NASCAR as those respective Product and Development Team’s fielded questions from the audience, just as the NFL and NBA teams did. Meet the Industry, Pt. 2 brought an update from the ongoing Handbid auction and an introduction to ThePit.com.

One of the most highly anticipated events of the day was the Leaf Presentation plus Q&A with Leaf CEO, Brian Gray. Brian spoke about Leaf Pearl, a product he called “the best we have ever made.” This was an ultra high end set that featured pearls on the cards and also included one of either a Shohei Ohtani or a cut signature that included some very big names. While discussing the 2018 Draft Products, Mr. Gray felt that football in 2018 was going to be very hot due to the incoming draft class. He stated that it had the potential to match the Class from 1983. He covered pending changes in some of the products from Leaf and then took questions from the audience. Audience participation covered auto exclusivity, player exclusive sets and “value vs. price”. All attendees received an Industry Summit Exclusive Leaf Mystery Autographed Full Size Jersey, courtesy of Leaf.

The business portion of the summit concluded with the arrival of Dallas Mavericks Star Rookie, Dennis Smith Jr. Participants at the Summit took photos and are scheduled to receive autographs from DSJ, compliments of Panini. Smith has been a star for the participants of the Summit as he scored 16 points and helped lead the Mavs to a victory on Day 1 and was the guest appearance on Day 2.

The Fat Packs were busy again with another full lineup of guests. They hosted Randy Nelson (Keynote Speaker), Richard Russillo from Rich & Deals, Frank Lewandowski from The Pit, Rich Klein, Suzanne Pham from BallQube, Steve Grad and Brian Sobrero from BAS, and Chris & Adam from Buck City Breaks. Even though this is Day 2, the Fat Packs have put in 3 full days of interviews and have one more to go.