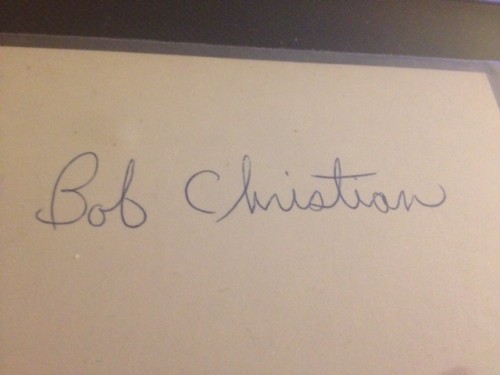 Bob Christian compiled a .224 lifetime batting average in 54 major league games. That included 4 home runs and 19 RBI. In 1968, he was a September call-up by the Detroit Tigers where he doubled in three at-bats. Three.

And I was thrilled to pay $350 for his autograph.

This is what the National Sports Collectors Convention is all about – finding the Bob Christians of the world. And when looking for a guy like Christian, it’s not easy. I needed his signature to add to my almost-complete 1968 Detroit Tigers autograph collection.

Why would anybody in their right mind pay that much for a non-descript ballplayer? My wife would ask the same question. But anyone who has been searching for that one difficult signature to complete a team autograph set (hello 1961 Yankees collectors needing Duke Maas) understand. And the reality of Bob Christian is that he wasn’t around long enough to sign a lot of items, even if there was a big demand back in the late 1960s and early ‘70s. For one thing, he spent his last season as a ballplayer playing in Japan.

But what really makes him a tough signature is the fact that Bob died of leukemia. He was just 28 years old. 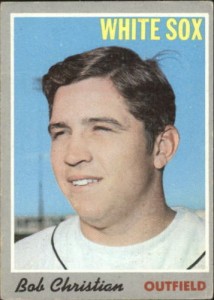 “He’s really tough and at the top of the list for all ’68 Tigers collectors,” said Kevin Keating of Quality Autographs.

I made the purchase from Tampa-area autograph dealer Bill Corcoran, one of the most respected dealers in the business. Both Corcoran and Keating – and autograph dealer Ron Gordon – have assisted in building my ’68 Tigers collection over the years. Keating has gone years without a Christian autograph. Corcoran, meanwhile, had two in inventory – the one I purchased on a 3×5 card and another as part of a 1969 Chicago White Sox partial-team-signed Tigers popcorn container, where the signatures were presumably obtained while the Sox played in Detroit.

At the start of the show, Corcoran had two Christian signatures in his inventory. Shortly after the show opened, he had none. Keating bought the other.

“You don’t see them very often,” Corcoran said of Christian signatures. “He’s the key to the ’68 Tigers.”