There are five cards in 1952 Topps Baseball that you will typically find counterfeited more than others in the set.

Of course, every card collector will say card No. 311, the Mickey Mantle card. Yes card, not Rookie Card. Please stop calling it one. There are countless variations of fake Mantle cards we see in grading on a nearly daily basis. Some are terrible homemade jobs. A few are pretty good. The bulk of the fake Mantles we see fall somewhere between close to terrible to almost passable.

The next card is the last card in the set, card No. 407, the Eddie Mathews Rookie Card. I believe I see counterfeits of this card second in number only to the Mantle card.

Next in line would be card 312, the Jackie Robinson card. I have yet to see a good quality fake of this card. Not saying there aren’t out there, I just have not seen one.

The next position down the most faked ’52 Topps card list is actually a tie between card No. 313, Bobby Thomson and No. 261, Willie Mays.

Let’s take a look at an example of the 1952 Topps Mays card and look for some of the key signs of a fake. 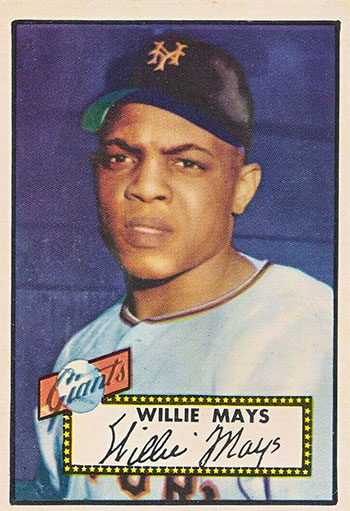 The particular card I chose to talk about is what I would call a ‘not terrible’ example. It would fool some collectors not familiar with ’52 Topps cards or know some basics in detecting vintage counterfeits. 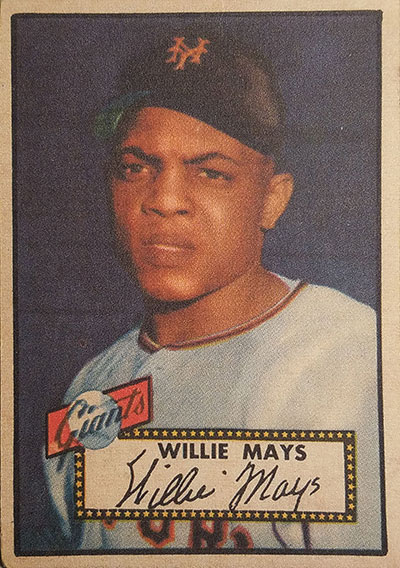 The first area we will look at is the stock. This fake intrigued me because of the stock. The forger put a little thought into what stock to print on. Unfortunately, it actually reminds one of an actual vintage card. There is forced wear on the corner and edges giving the first impression of an honest 68 years of wear.

Fortunately, there are areas that could not be replicated on a passable level such as the gloss.

But if you get past the stock with your loupe, the printing will surely stop you.

Let’s take a closer look at the printing by starting with the name box. I like using the name box as a starting point when authenticating a 1952 Topps card. The reason is, it is a large area of glossed stock, with minimal printing.  This gives me a large area for being able to see and compare the unprinted surface with printed surface. On a large number of fakes, this area will consist of print dots, not only over the entire white area but also in the design devices that should be made up of solid ink. 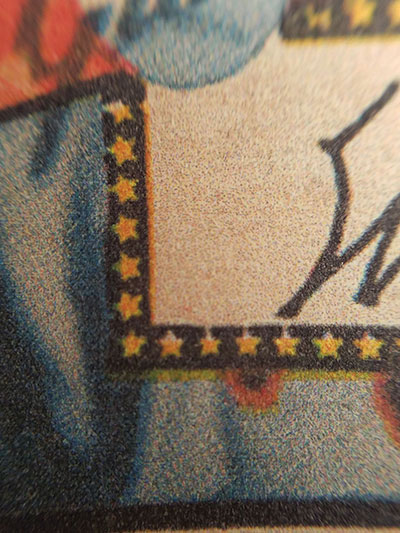 Detail on the name box on card front

If the name box passes the test, you have just eliminated 99% of fakes. And that’s a good percentage to start with.

Let’s skip over to the bottom-right portion of the card front, just outside the name box. Here we can see that the blue background is very pixilated and the outer white border, which is the same as the white in the name box, is completely covered in fine print dots. This area should be like the name box and not have any print dots in the white areas.

Notice also how the thin black border is pixilated when it should be solid black ink. 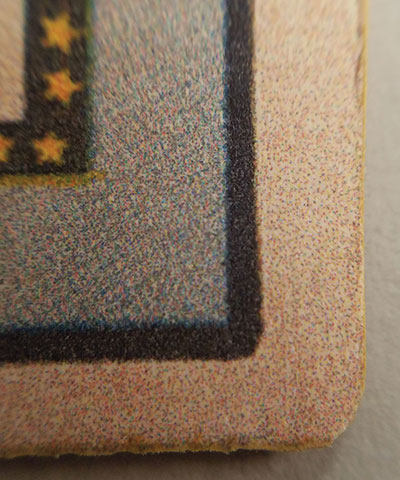 Telltale Signs on the Back of a Fake

Let’s flip the fake card over and take a look at the back. 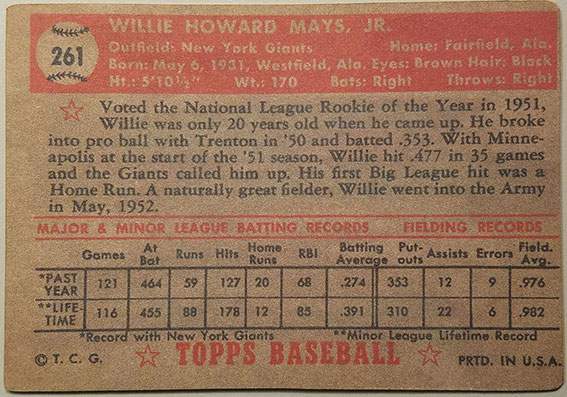 Looking at the card number in the top-left portion of the back, we see that upon first glance, the back seems to be a porous, raw card-stock surface. This can sometimes lead to it being difficult to determine if the back is printed correctly. When printed, a portion of the red ink would have soaked into the stock’s surface making some edges to lose their sharpness. 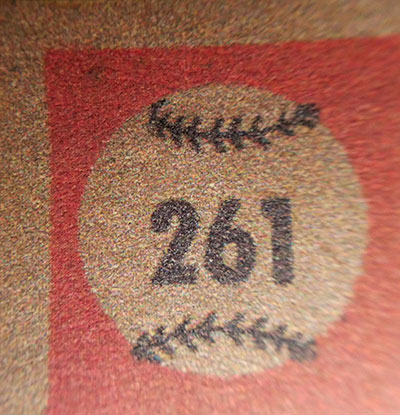 Detail of the card number on reverse

This is not the obvious red flag.

The obvious red flag is the fine print dots covering the entire cards surface. They are small enough to give the illusion of an authentic back from a distance. As you examine the surface closer, the dots become apparent. 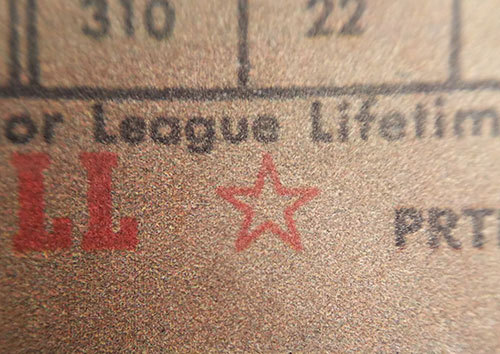 Detail of surface of card’s reverse

Finally, the last area we will look at is the weight of the card itself. In hand, the card feels close to the correct weight but the weight is off just enough to tell my brain that something is a little off. A quick trip to the scale and it is confirmed, the weight of the fake card is different from an authentic example in a similar condition.

I would like to add that there is one more great tool in detecting fakes such as this and the best way I can describe it is that it’s a ‘sixth sense’ type of thing. When you handle vintage cards long enough, you develop a sense for the feel of cards. This Mays card I walked through a few areas to determine the authenticity. For me, when I got the card in hand, it didn’t even come out of the card saver completely. It was an instant ‘NO’ from my brain. It’s nothing more special than putting in the effort and doing it enough. Look at and handle enough cards and you can do it, too.

If a card is on your radar and it’s a pricier card, the best defense is to learn as much as you can about the set and cards. Buy a few commons from the set. Common cards were printed on the same sheets as the higher value cards. All was equal in the beginning. Get your loupe out and spend some time looking at the printing. You will start to ‘get the feel’ for any card in the set in no time at all.