At the 2019 National in Chicago, I was asked a question I’m asked time and time again: What is the most counterfeited card in the hobby?

The fake we see the most of would have to be the 1986-87 Fleer Michael Jordan Rookie Card. The Jordan RC has held this unfortunate title for many years with no less than a dozen different variations and versions of fakes. Some are quite sophisticated, while others can be spotted from across the room. Inside Beckett Grading, we see counterfeit cards every day. From the most basic and crude homemade fakes to harder to detect fakes coming from around the world.

But the type of cards we see are a wide variety of players and sports.

If the Jordan RC is the most seen fake card, then what is the second?

The clear winner of this not-so-prestigious title of second-most-seen fake card is the 1979-80 O-Pee-Chee Wayne Gretzky rookie. 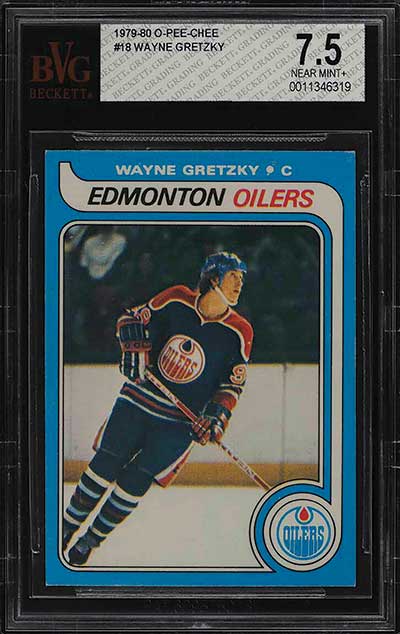 Notice I specified the O-Pee-Chee version of the Gretzky RC as being the second-most seen counterfeit card. The Topps version doesn’t seem to warrant being counterfeited on the same scale as the OPC version. In fact, in 21 years of being a professional card grader, I have seen just one Topps fake.

The OPC Gretzky RC is the most valuable version by a mile but since I see fakes of cards that sell for less than $20, I’ve always been stumped as to why the Topps version isn’t counterfeited that often.

Fortunately for us collectors and dealers, most all of the different versions of the counterfeit 1979-80 O-Pee-Chee Wayne Gretzky Rookie Cards share similar traits and key detection spots.

The card stock is one of the first key places to look when looking at an OPC Gretzky RC.

O-Pee-Chee was a Canadian company that contracted with Topps to print their own versions of Topps cards to be sold in Canada.

Of all the types of fakes I have seen, I have yet to see a counterfeit that had stock or cuts resembling authentic OPC cards. There have been a small number that looked close, but replicating the actual look and feel and the rough cuts has proven to be nearly impossible, at least so far.

The gloss of the surface is an-other area to examine with many of the fakes have a matte surface.

Looking Closer at the Ink

With your loupe, let’s look at the team name and Gretzky’s name at the top of the front of the card. Like the black border, the names should be printed with solid ink and not comprised of small print dots. They should be sharp and smooth in appearance. Counterfeit cards are usually created by taking an image of an authentic card and not created “from scratch” using traditional graphic design and printing techniques. When you have an image of an image, there is a loss of quality in the printed image. Areas of the design that are supposed to be solid ink are now made of print dots. 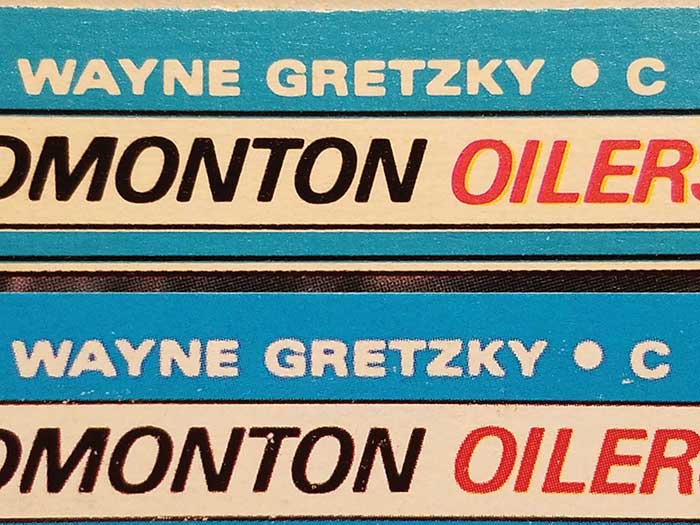 Comparison of the team and name captions with the counterfeit card on the bottom. 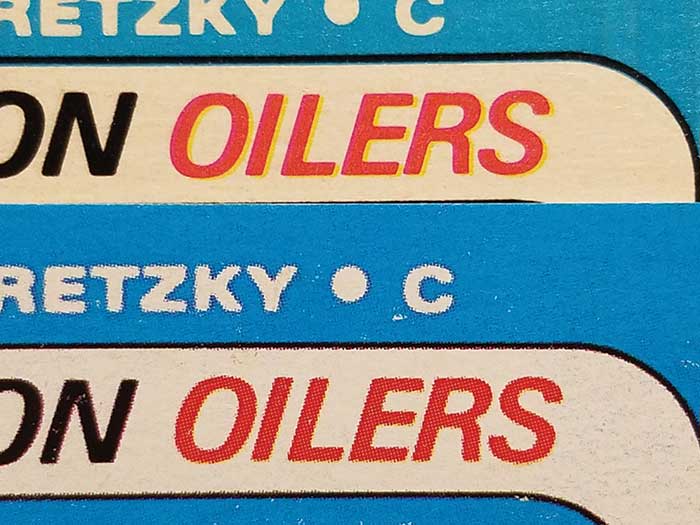 Closer comparison of the team and name captions with the counterfeit card is on the bottom. 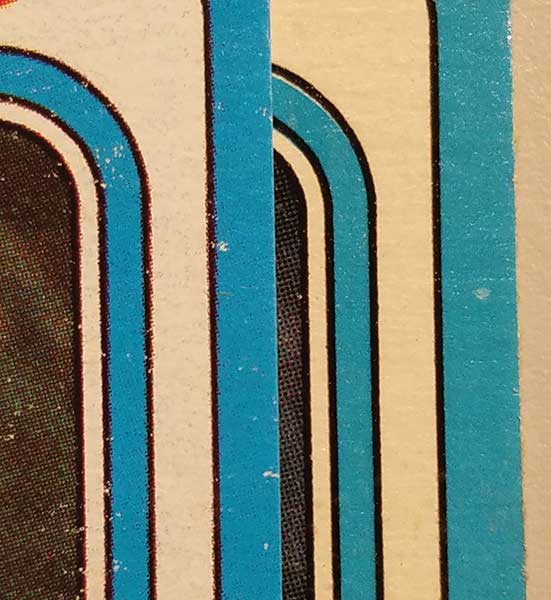 These apply to the fake Topps cards as well.

The next area to examine is the area of ice on the front of the card. Under a loupe, the area of white ice on an authentic card should have fine blue print dots and white ink. Counterfeit cards can have red print dots in with the blue dots. Some fakes will have red and blue dots covering the entire ice surface.

Some people talk about the yellow print flaw found on Gretzky’s left shoulder on an authentic OPC card. The thought was at one point that if the yellow dot is missing, it is a fake. This is still true for the most part. Most fakes are simply an image of an image and the yellow dot is lost in the replication. This is not a 100 percent guarantee, though. I have seen a counterfeit OPC version that did have a smaller yellow dot. While this is still a good place to look, it cannot be relied upon as a 100 percent indicator.

Aside from the Gretzky RC, the 1979-80 OPC set is still a relative affordable set. The cost of picking up a few common cards to use in comparison is peanuts compared to the financial loss of buying a fake 1979-80 O-Pee-Chee Wayne Gretzky Rookie Card.

Buying a raw card like a Gretzky RC, or any other highly counterfeited card online, is a big gamble. If you can’t see the card in person to make the comparisons, it may not be worth the headache of having to deal with a return, or worse, being stuck with a fake card.