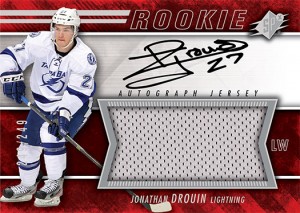 As the saying goes, good things come to those who wait, and in the case of Tampa Bay Lightning rookie Jonathan Drouin, there are a lot of good things coming his way.

The third overall selection in the 2013 NHL Entry Draft, he took a longer road than expected to the pro level as he spent last season back in junior with the QMJHL’s Halifax Mooseheads and a thumb injury caused him to miss some action and have a late start this year with the AHL’s Syracuse Crunch.

Promoted on Sunday following a short but successful two-game stint in the minors which saw him score his first professional goal, he hit NHL ice for the first time last night as the Lightning surprisingly fell to the Edmonton Oilers by a score of 3-2. Drouin managed to fire one shot on net during 16:10 of playing time and is expected to be in the lineup again tonight in Calgary. 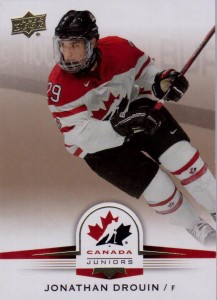 With all of the excitement regarding his debut, collectors were wondering if there would be a Young Guns card of Drouin in Upper Deck’s next release.

Should Drouin give a strong performance over the first few weeks of his NHL career, there should be tremendous interest in the Black Diamond cards once they hit the market. Even with a relatively short wait for Drouin’s first rookie cards, there are still plenty available of him from his junior days. In The Game produced numerous cards of him in recent years and he is also prominently featured as part of the 2014-15 Upper Deck Team Canada Junior product that hit store shelves this fall.