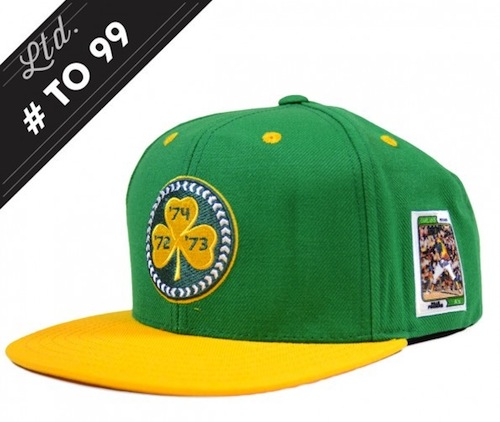 It’s a busy time in the sports world as well as the hobby — here are some quick takes on a few things popping up that might be of interest for both collectors and those within the industry. Let’s take a look in the Hobby Notebook …

— Serial-numbering Not Just for Cards: Topps revealed a new line of “Card Patch Hats” on Tuesday that pair custom-made caps with a patch showing a memorable baseball card on the side. The caps can be found with colors for seven memorable teams from the past and every single one of them has a stitched serial-number inside the headband. These are limited to just 99 caps per model and are $39.99 on Topps.com. Some of the teams found here include the 1972-74 Oakland A’s, the 1977 New York Yankees, the 1984 Detroit Tigers and the 1986 New York Mets.

— Busy Days at Panini America: The news out of Irving, Texas, last week affected all sports as Panini America signed deals with three major universities to use their trademarks in all upcoming products as well as produce school-specific card sets. There’s more to come on that front in all sports, but baseball alone is a busy sport, too. Between now and the end of the year, Panini also has six new baseball products scheduled to arrive — at least one will include Derek Jeter autographs — and some of them haven’t even been formally announced yet. But to come before that? A substantial number of Panini America employees are headed to the parent company’s headquarters in Italy for meetings. What do all of these things have in common? They aren’t cheap to pull off — so business must be going pretty well.

— Vintage Cardboard Bounty: Collecting century-old cardboard can have its challenges — like even knowing if cards truly exist. Tustin, Calif.-based Memory Lane Inc. has issued a $500 reward for anyone who can help find eight cards from the 1912 Plow’s Candy E300 set. The cards with a bounty are missing from the major population reports and feature Bobby Byrne, Hal Chase, Red Dooin, Larry Doyle, John Lapp, Fred Merkle, Martin O’Toole and Tris Speaker. Contact the company at the link above if you have any information.