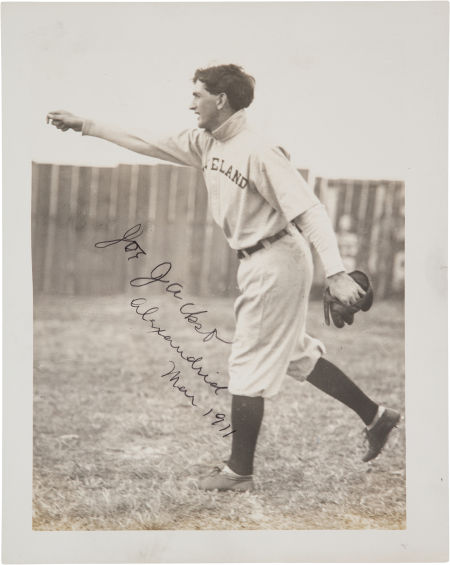 The only known baseball photograph signed by “Shoeless” Joe Jackson will hit the auction block later this month via Heritage Auctions.

The image was taken by Frank W. Smith, a photographer for The Plain Dealer in Cleveland, Ohio, when Jackson was a member of the Cleveland Naps between 1910-15. The photograph was discovered in a photo album compiled by Smith in 1911. The album is estimated to sell for more than $170,000.

“This previously unknown autograph collection stands out for its significance, rarity and remarkable state of preservation,” said Chris Ivy, director of sports auctions at Heritage, in a prepared release. “The Frank W. Smith Collection is one of the most exciting ‘time capsules’ of the early 20th century game ever to surface in the collecting hobby.”

The book also includes signed photos from more than 50 players, including Jackson’s teammate Nap Lajoie as well as 1911 NL champions John McGraw and Christy Mathewson of the New York Giants.