In its second year as a basketball brand, Panini America‘s National Treasures is bringing back plenty of what made the product popular, including some new additions to add to the appeal.

Part of what made this product last year were Blake Griffin’s Rookie Cards. His cards sparked great conversation about the hobby and had many talking about his signed cards that sold for high-dollar amounts.

Although, Griffin isn’t a rookie in this high-end product, Panini expects the popularlity of this set to continue when the National Treasures hits the card market on its scheduled Aug. 3 release.

See a full gallery after the jump:

“We  were delighted with the collector acceptance of 2009-10 National Treasures and realized what a successful foundation was established with that release,” Panini America NBA Brand Manager David Porter said. ”Many of the same elements will be found in the 2010-11 National Treasures, including the most desirable and scarce rookie cards for the 2010-11 Class. We are also excited to bring back an array of our popular Logoman cards and uniquely designed Laundry Tag material cards of many current and retired NBA Stars.”

National Treasures is expected to include many on-card autographs including those of Griffin, Kevin Durant and John Wall.

Durant’s inclusion into the set should be joyous news to collectors considering his autographs in products this year were very, very limited.

One of the case hits listed also hearkens back to the pioneers of the game. Collectors could find a George Mikan memorabilia card. Mikan was considered one of the 50 greatest basketball players in 1996. The Hall-of-Fame members changed the game by showing what big men can do with talent.

Mikan is part of the new lineup with National Treasures, including the addition of Erving and David Robinson autograph cards. Also, for the first time Panini will have Wilt Chamberlain memorabilia cards. 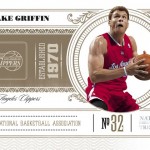 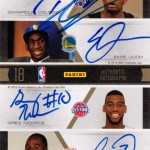 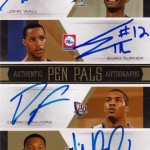 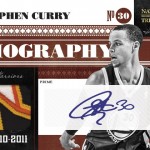