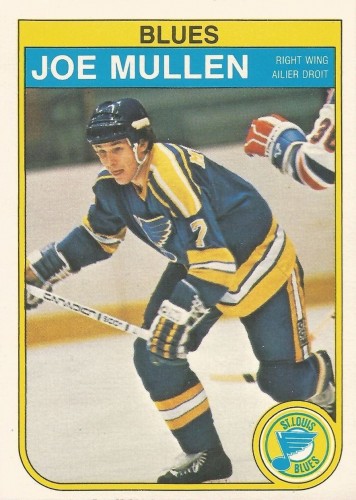 A.J. Sports World recently revealed that Joe Mullen will be signing at the 49th Sportcard & Memorabilia Expo in Toronto on May 3, 2015 and it is a rare Canadian appearance for the Hockey Hall of Fame member.

Over the course of his career, Mullen proved to be one of the greatest American-born talents the game has ever seen and he retired at the end of the 1996-97 campaign with over 500 goals and 1,000 points. Greatly underrated, he was also a part of three Stanley Cup championship squads and won the Lady Byng Trophy twice during his time with the Calgary Flames.

Mullen’s autograph will set show attendees back $35 for regular items and premium items will be signed at a rate of $50. Personalizations are included for free, but inscriptions are an additional $20.

Check out some neat trivia about Mullen’s rookie card after the jump.

As a side note that may interest vintage hockey collectors, the photo used on Mullen’s rookie card from the 1982-83 O-Pee-Chee set was taken by Bruce Bennett at Madison Square Garden on March 21, 1982. While the St. Louis Blues lost to the New York Rangers by a score of 8-5 that day, Mullen scored one goal and added an assist on a first period tally by teammate Blake Dunlop.

For details regarding other signers that are expected to appear at the show, check out our earlier article here.