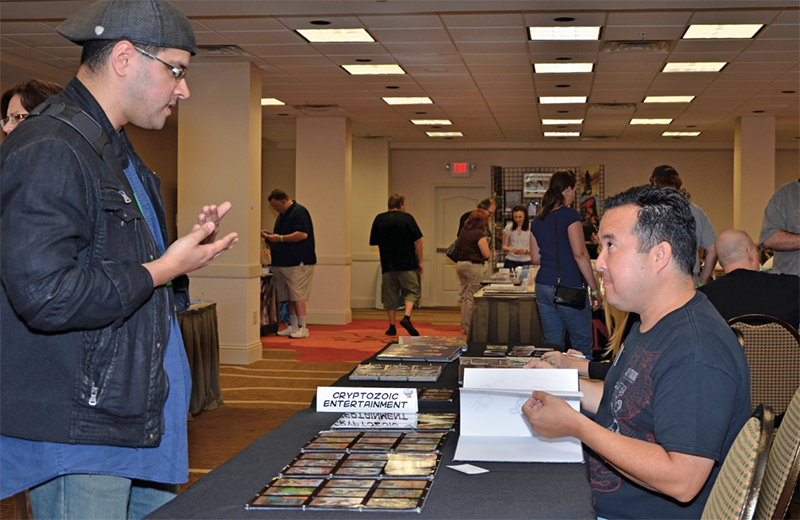 He had been with the company for nearly a decade and has played a huge role in their non-sport card line from its earliest days. In that time, he worked on several titles including The Walking Dead, The Big Bang Theory, The Hobbit and numerous DC sets covering both comics and television shows. More recently, George helped introduce Outlander and Rick and Morty.

He was also working on expanding Cryptozoic’s digital card lines through the Quidd app.

George was very active both within the company and open with the collecting community. He regularly attended shows and events like the Philly Non-Sports Show, The National and the Industry Summit. He was also readily available online through social media.

With art being a big part of a lot of Cryptozoic’s releases, George helped many artists get their start or showcase their work in new places.

On a personal level, I’ve had the chance to meet and speak with George several times. Something that always struck me was his passion for the industry and the pride that he took in his and his team’s work.

George was always excited about Cryptozoic projects. For some people, this can come across as a sales pitch. For George, it was because he was a fan. I can’t say for certain for every license, but there were many times I spoke with him and he was stoked to be “doing research” watching Orphan Black or whatever else was coming down the pipeline. You got the sense that he genuinely loved what he did and was excited for what could be done.

And maybe that was his secret. George understood what it meant to be a fan because he was one himself. And he channeled that fandom and pride into the products he and his team worked on.