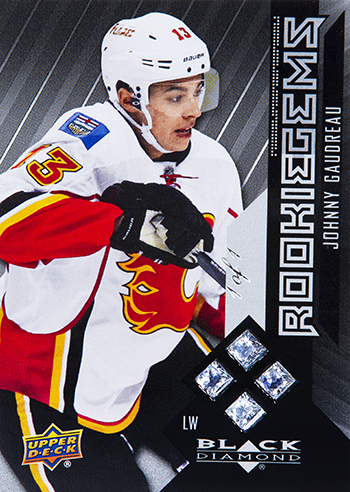 The wait was over for 11 lucky hockey card collectors on Tuesday as Upper Deck held their Black Diamond Rookie Gems Draft for the second straight year. Redemption cards were found in packs of 2014-15 Black Diamond and each one ensured that the owner would end up getting something shiny.

Selected first overall was Calgary Flames freshman Johnny Gaudreau, who was also the overwhelming premier choice of Beckett Hockey readers that voted in a poll prior to the event. A favorite for the Calder Trophy, the young phenom tied for the lead among all NHL rookies in points during the regular season and was a major force behind his team’s return to playoff contention.

Which cards were taken in the draft? Find out after the jump. 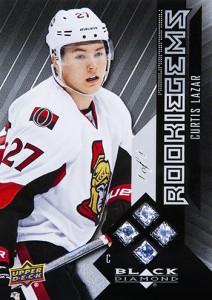 The shadowbox-style cards are among the thickest ever produced for hockey collectors and each one contains four one-carat lab-created diamonds. A total of 24 redemption cards were seeded into packs while one was set aside for collectors that entered without purchase.

Upper Deck’s Chris Carlin was once again the master of ceremonies for the event and started things off by placing small pucks with the names of each collector who had activated their redemption card into a drum and drew them out randomly. From there, individuals were called in order and they were given an opportunity to pick from a pool of players. For those that were not reached at the time of the draft, Upper Deck selected their card based on the highest value found for a corresponding base card from the 2014-15 Black Diamond set from a recent issue of Beckett Hockey.

The draft order was as follows:

At this point, there are 14 cards left, but one of them is reserved for the winner of a No Purchase Necessary draw. The remaining cards are:

Carlin summed up the importance of this program and what it means to the hobby.

“With changes in the way collectors experience products, we like the idea of trying some different promotions to enhance the pack-opening experience. For the last two years, the Draft program has been a unique way to engage our loyal fans using a platform they are comfortable with. The fact we actually call collectors to have them give their pick provides an unexpected twist to the promotion and it is always fun to hear their responses.”