Fun Items at The National and What to Expect Thursday

For a late bloomer, Pete Wilbur sure has an eye for a great piece.

Wilbur, stationed at the B.P. Sports booth at the 40th National Sports Collectors Convention, didn’t get into collecting until he was out of his youth.

As an adult, he became interested in projects. The spark came from an autograph collection of the NBA’s 50 Greatest Players in 1996. He finished the book of signatures, but there was an element of dissatisfaction.

“What do you do with a book?” Wilbur thought.

His true autograph fever came when the Atlanta native witnessed the hype surrounding the Summer Olympics in 1996.

Admittedly skipping a lot of steps, this leads us to 2019. 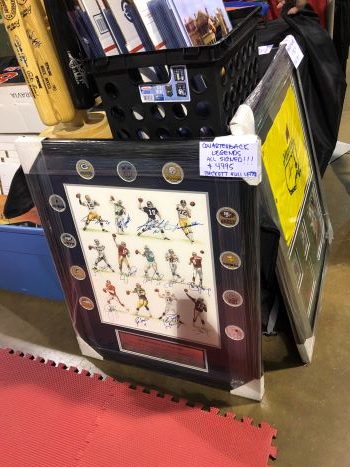 Sticking with the project theme, Wilbur is showcasing a framed photo made up of gridiron legends. It highlights the 13 greatest quarterbacks of all time, in his opinion. Each signal-caller signed the piece.

“It was fun to debate with friends,” Wilbur said. He added that Tom Brady and Troy Aikman were some of the trickier John Handcock’s to acquire.

Starr’s recent passing only increases the value. The one on display is the fifth made, and it is listed for $4,995.

“I wanted to create something that someone would regret not getting,” Wilbur said.

There were several other pieces that caught the eye (surprise, surprise, right?).

Here are some others that caught the eye.

Deshaun Watson did some damage in this jersey #NSCC19 pic.twitter.com/vpN4OXH4xN

Prominently on display at the Fanatics booth, a Watson game-used Clemson jersey is sure to catch the eye. The white version with the Fuller patch (honoring another Clemson great, Steve Fuller) on the right shoulder. Per the label, it comes from the 2015 season. That was the year Watson burst onto the national scene by leading the Tigers to the national championship game. It’s listed for $9,999.99, down from its usual price of $11,999.99.

You know, just the uniform worn by the most dominant basketball player ever. No big deal. #NSCC19 #wiltchamberlain @nsccshow pic.twitter.com/gVStvnFEJQ

The Big Dipper hangs over patrons of The National near the entrance as part of the Memory Lane Inc collection. It is photo-verified authentic.

Barack was a baller. There is no doubt about it. #NSCC19 pic.twitter.com/QlYNCKiFw5

As detailed here, Heritage Auctions displayed Barack Obama’s high school basketball jersey. The 44th President, who famously filled out a March Madness bracket on ESPN each year, is an avid hoops fan. Proof of his baller ways comes in the form of the jersey he had in high school. Legend has it, he might even be interested in having it again.

What to Look for on Thursday

With the doors open to the general public, Thursday promises to be madness.

Vee, of Vaynerchuk Media has a huge social media presence and has become more active in sports cards again.

Details can be found here. The Topps Q&A gives collectors a direct chance to interact with Topps executives. Prior signup is required. Event starts at 6 p.m.

Thursday’s group expands on that greatly. Here are the list of guests, per its website. Times and apperances are subject to change, of course.

Beckett Booth at The National