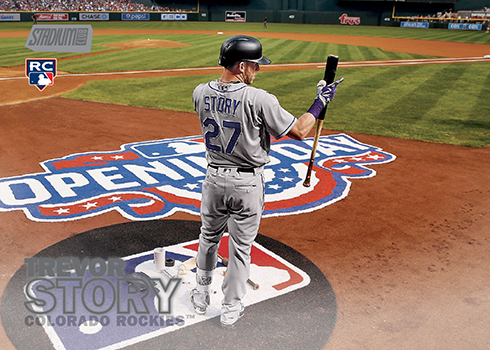 It takes time to get a player into a baseball card product. That window may have shortened by months with the introduction of Topps Now, but the hobby is still currently driven by the traditional pack-based products. So while it has been about a month since Trevor Story made his MLB debut with the Colorado Rockies, there’s still a bit of a wait for his first pack-inserted rookie cards. They take planning, preparation, multiple rounds of approvals, production and distribution. But they are coming and Topps has unveiled their plans for the first Trevor Story rookie cards.

Like Nomar Mazara, Story’s first rookie card arrives with 2016 Topps Stadium Club Baseball. The product is due out at the end of June. Story will be included in the base set and get the full parallel treatment.

From there, the Rockies shortstop’s next card in a Topps product will be 2016 Bowman Chrome Baseball. 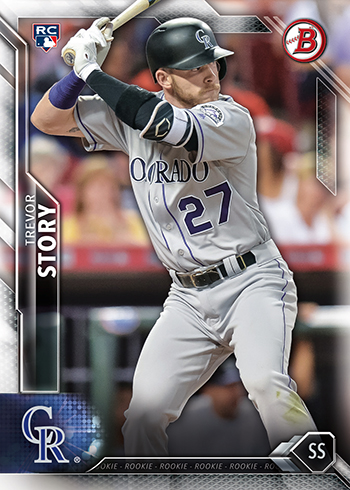 The first Trevor Story autograph cards of the year are slated for 2016 Topps Allen & Ginter Baseball. The National League’s Rookie of the Month for April will have a rookie in the base set there as well.

Expect Trevor Story rookie cards to start popping up regularly in product throughout the rest of the year once Stadium Club is released. And although the deal covers memorabilia only, Story does have an exclusive autograph agreement with Topps. It’d be more surprising if he didn’t have several more autographs by the end of the collecting year than just Allen & Ginter.

While these are the first pack-inserted Trevor Story cards since making his MLB debut, he has several cards already including prospect cards and autograph in 2011 Bowman Draft Baseball. He also has a few cards already in the print-to-order 2016 Topps Now Baseball.