How many people are SyFy Network geeks out there?

You can count me as one of them, although one of my favorites is coming off the air soon (I’ll miss Eureka).

However, another favorite from the network is Warehouse 13. The fun thing about many of these shows is there are trading cards of them on the market.

Rittenhouse Archives is also creating another set with Warehouse 13: Season Three, which comes out in October and with many of the main cast members signing autographs.

The cards will be sold as part of premium packs ($50 each) with six cards in every pack, including two relics and one autograph. This set is going to be extremely limited to buyers with just 200 boxes being made, which means just 3,000 packs will be made for the third season of Warehouse 13.

Rittenhouse is also giving away extra cards as part of an incentive program. 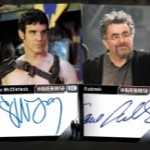 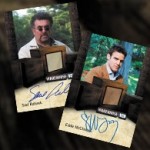