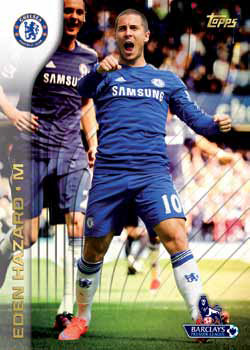 All of the top talent from the Barclay’s Premier League is back again in a premium trading card release as Topps produces the sophomore edition of its high-end 2015 Topps Premier Gold product, which saw a successful debut last year.

As a special new twist for 2015, legends have been added to the roster and each display box will contain 10 mini boxes that will yield four base cards along with either an autograph, relic or autographed relic card.

What else is in store for collectors breaking 2015 Topps Premier Gold? Find out after the jump. 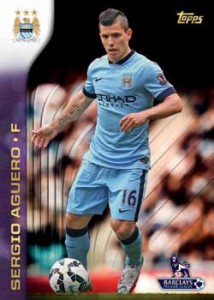 Topps made several modifications to the brand which include framed insert and autograph one-of-one parallels. Pure Class Dual Books pair up two of the best players around and there is also a Golden Boot die-cut autograph collection. It should also be noted that 2015 Topps Premier Gold will only be available in North America.

Shortly before the product’s release, Topps announced that Wayne Rooney autographs were added to the set. He’s part of the Golden Boot Die-Cut Autograph checklist.