One of the first places to get autographs of the next football draft class will be from 2014 Upper Deck Football.

The set is scheduled to come out on April 15 with about 200 new players appearing in their college uniforms. Collectors can expect to find three autographs in every box with Rookie Lettermen, Star Rookie Autographs and 1994 UD Tribute Autographs.

Each hobby box will contain 12 packs with six cards in each. Each pack will have two to three Star Rookies with a chance for rare cards. The checklist will breakdown with 50 base cards, 100 Star Rookies, 60 Star Rookies short-prints and 40 rare Star Rookies.

When collecting the rookies, one of the tougher pulls will be Star Rookies black and white parallels. These cards, which are numbered to 10 or fewer, will be a case hit.

Upper Deck will also add a focus to college stars of the 1970s and 80s with a 14-card insert featuring some of the top names. There will be two 1970s/80s College Football Heroes cards in every box.

College Tribute Patch Cards will appear in 2014 Upper Deck Football. These cards will fall at a rate of four in every case. They will feature famous traditions from football programs across the country such as Clemson’s Howard’s Rock. 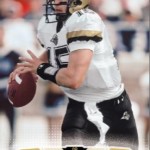 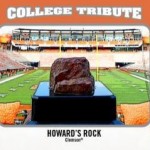 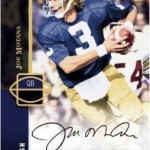