TriStar is getting in on the 2014 football draft hype.

Each box will contain one Signa Cut with a past, present or future star. All cuts are limited to 25 or less with others numbered to 10, 5 and just one-of-ones.

Collectors can find four Back-2-Back Signa Cuts in every case. These cards will feature two autographs on one card such as Peyton Manning and Russell Wilson together or Johnny Manziel and John David Crow.

TriStar will include randomly inserted draft tickets redeemable for bonus authenticated autographed memorabilia such as a Jadeveon Clowney autographed football, or a signed framed photo from Marqise Lee, Johnny Manziel or Teddy Bridgewater.

TriStar Signa Cuts Football Draft Choice Edition will be extremely limited with 75 cases made and 24 boxes (two 12-count mini cases) in each case. Each case and box will be individually numbered. 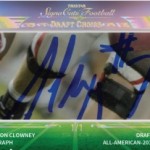 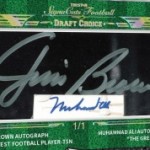 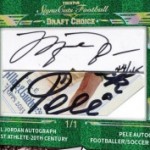