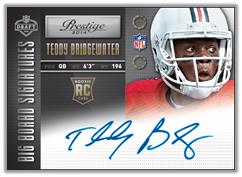 Panini is set to release 2014 Prestige Football this summer.

Each box of 2014 Prestige Football will have three autographs and one memorabilia card on average, and a box topper.

Prestige will also have a 200-card base set with 100 Rookie Cards with a chance at short-printed Rookie Photo Variations. Each box will contain 24 packs with a Rookie Card in each, and eight cards in every pack.

The Prestige hits will be rookie heavy with Rookie Signatures (and six parallels), First Impressions, Draft Big Board Signatures and more. The memorabilia cards will feature Rookie Jumbo Patches with four parallel versions.

Inserts in 2014 Prestige include Draft Picks, Prestigious Picks, Number Ones, Road to the NFL, Draft Big Board, Draft Day Standouts, All Fantasy Team, Top of the Class, NFL Shield, Behind the Jersey Numbers, and Captains. There will be 16 or more inserts in every box.

Prestige is scheduled to be released July 2. 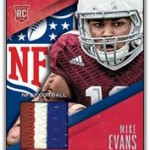 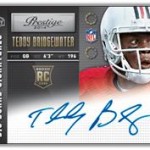 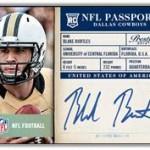