Bowman Football will hit in June jammed with rookies for the 2014 season.

The base set will have up to 220 subjects, with 110 rookies and 110 veterans. These cards will also come with several parallel versions include Silver Ice, Blue, Gold, Orange, Orange Ice and others. The rookies will have also have paper parallels (meaning the not chrome versions) with up to six parallels.

Other autographs include Bowman Autographed Mini Cards on vintage 1950 design.

Each hobby box ill have four on-card autographs and one veteran relic. The veteran relic will feature top-performing players with up to five parallels, including Printing Plates.

When it comes to inserts, Topps will include Bowman Die-Cuts and Bowman Mini Cards.

Collectors will also be able to find Under Armour All-America Game Autographed Cards from the 2011 game, and redemptions for autographs of 2014 NFLPA Rookie Premiere Players.

Each box will come with 10 packs and 25 cards in each. Bowman is scheduled to release in mid-June. 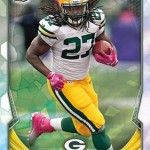 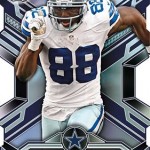 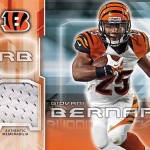 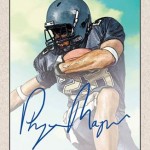 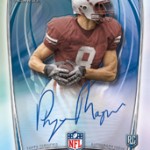