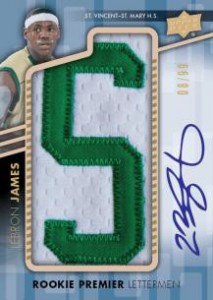 Upper Deck is ready for another exciting season of collegiate-themed basketball card products and they will kick things off in November with the release of 2014-15 Upper Deck Lettermen.

Boasting an average of two autographs per box, at least one of the signatures pulled will be a highly-coveted Lettermen Auto featuring either an up-and-coming rookie such as Doug McDermott or Shabazz Napier or an established veteran from a lineup boasting such legends as Michael Jordan or LeBron James.

Let’s learn more about this highly-anticipated product after the jump. 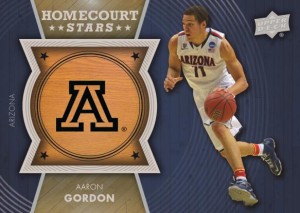 Memorabilia cards will be seeded once or twice per box and Upper Deck managed to put together an assortment that will appeal to collectors. Home Court Stars (1:15 packs) lead off the parade and will be joined by Monumental Logo Patches (numbered to 50 or less), Championship Banners (numbered to 125 or less) and Retired Numbers (numbered to 99 or less) cards that feature specially-created patches for this product.

There will also be tough-to-find autograph parallels for the Home Court Stars and Retired Numbers set.

The best set itself is small, but it will be packed with star power as there are 50 veteran cards and 30 Premier Rookies numbered to 999 copies each. There will also be a strong assortment of parallel cards dropping six times per box and they will be limited to 499 or less.

Where is it now: The infamous Evan ...