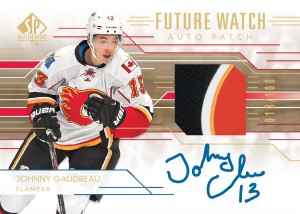 For over a decade, the SP Authentic brand has been an institution for hockey card collectors and Upper Deck has released some preliminary details about this year’s edition that is expected to his hobby store shelves in May.

Loaded up with three signed cards in every box, those busting packs are going to get at least one of the perennially popular Future Watch Autograph rookie cards in addition to potentially pulling some of the other big hits the brand has become known for.

What else can collectors expect to find in 2014-15 SP Authentic Hockey? Find out after the jump. 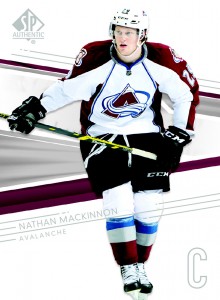 Naturally, there will be a SP Authentic base set and there will be plenty of regular player cards to go along with the subsets that have been a part of it in recent years such as Authentic Moments. There will be an as-of-yet unspecified number of unsigned Future Watch rookie cards which will be supplemented by 60 different Future Watch Autographs. In a surprising move, Upper Deck has released a checklist in advance of the players that are expected to sign and they are listed below.

Many of the players in the base set will have a Limited Auto Patch parallel that is split into three tiers that are limited to as few as 10 copies each. However, the bigger draw for many hobbyists are the Future Watch Auto Patches. A traditional SP Authentic feature since 2002-03, they will feature on-card signatures and are expected to be numbered to 100 as in previous years.

One of the most interesting concepts returning this year are the Upper Deck Update cards which will act as a supplement to the first two flagship brand series. They have taken this to a new level, though, by adding some more Young Guns cards that may ultimately prove to be somewhat scarce when compared to those that came earlier in the season. There will also be Exclusive (#’d to 100) and High Gloss (#’d to 10) parallels like the earlier releases. 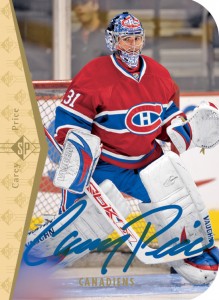 Old school fans who fondly recall the first stand-alone SP hockey release from Upper Deck 20 years ago will appreciate the 1994-95 SP Retro cards. Utilizing a classic design, there will be veterans and Premier Prospects with autographed, gold and die-cut parallels to track down.

The autograph lineup will also be bolstered by signed versions of the Authentic Moments (including tough-to-pull Duals), SP Chirography, Premier Chirography, Immortal Inks, Marks of Distinction and Buybacks. Sign of the Times will also be back once again with combos that bear as many as eight signatures on a single card.

In addition to the autograph hits, a typical box of 2014-15 SP Authentic Hockey is expected to deliver two to three unsigned Future Watch rookies, four Upper Deck Update cards, five Authentic Moments or All-Time Moments, one or two multi-player editions of Authentic Moments or All-Time Moments, six 1994-95 SP Retro cards and one or two 1994-95 SP Retro Premier Prospects. A case break should have two to three Autographed Patches along with three premium autographs.

The above checklist is preliminary and subject to change before release. 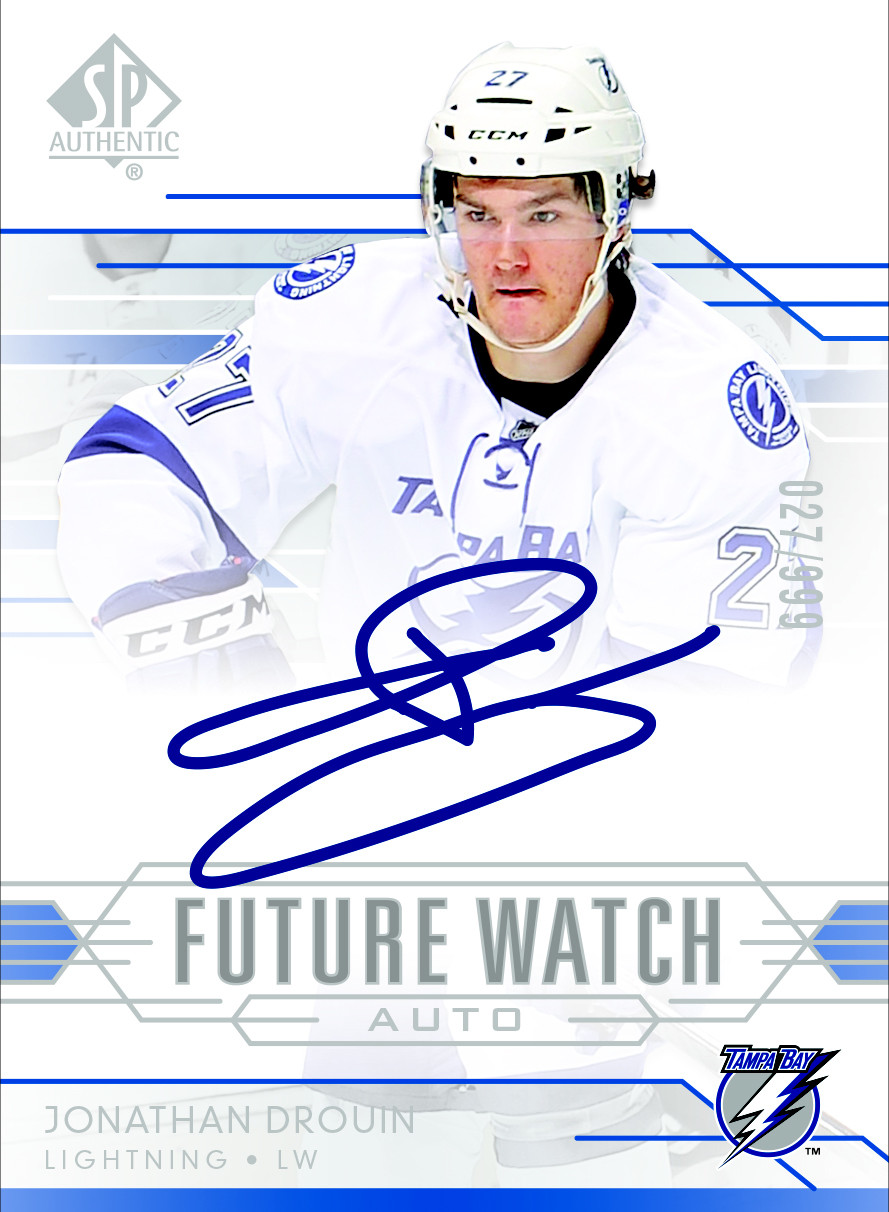 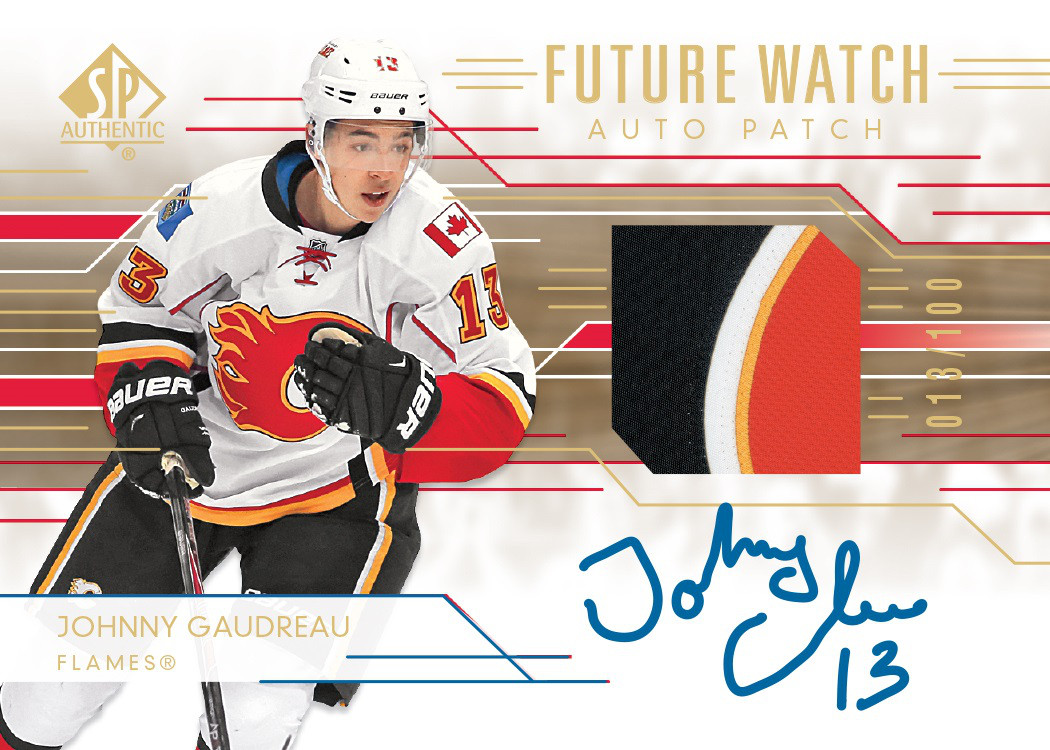 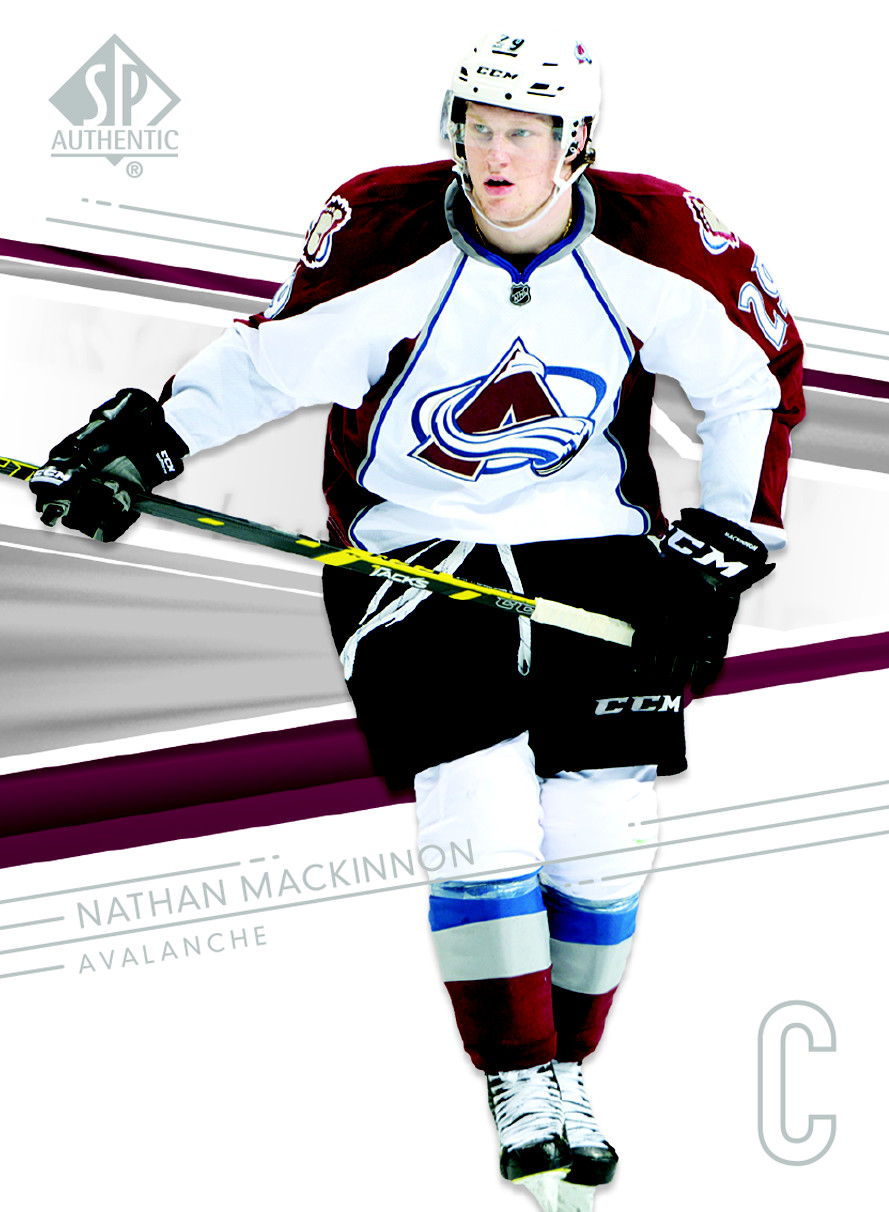 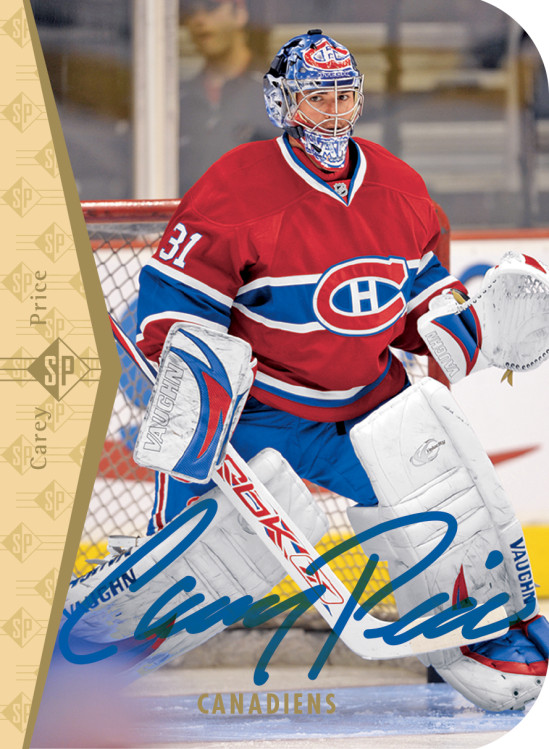 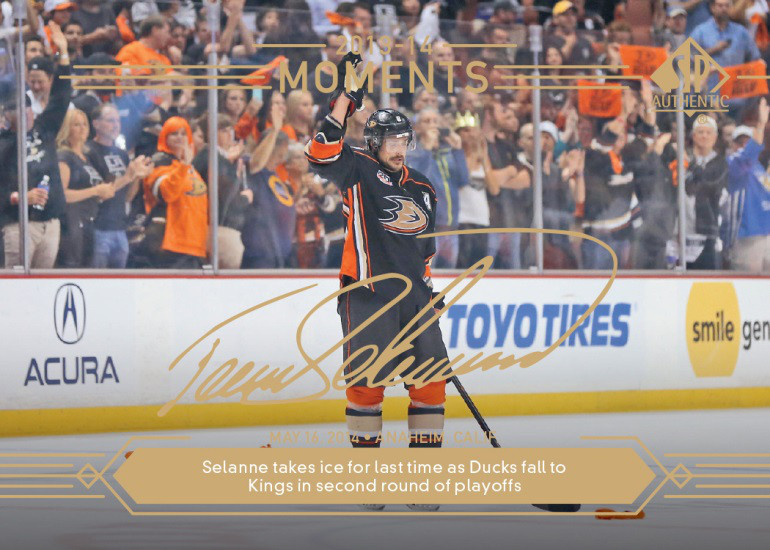 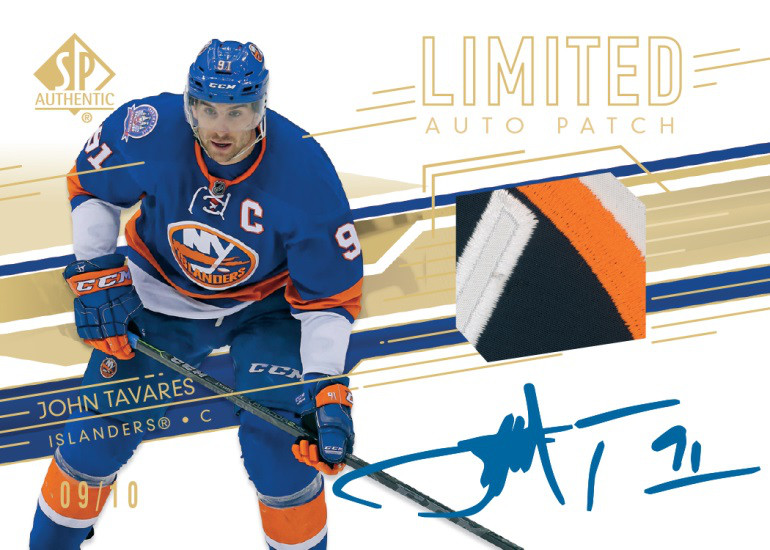 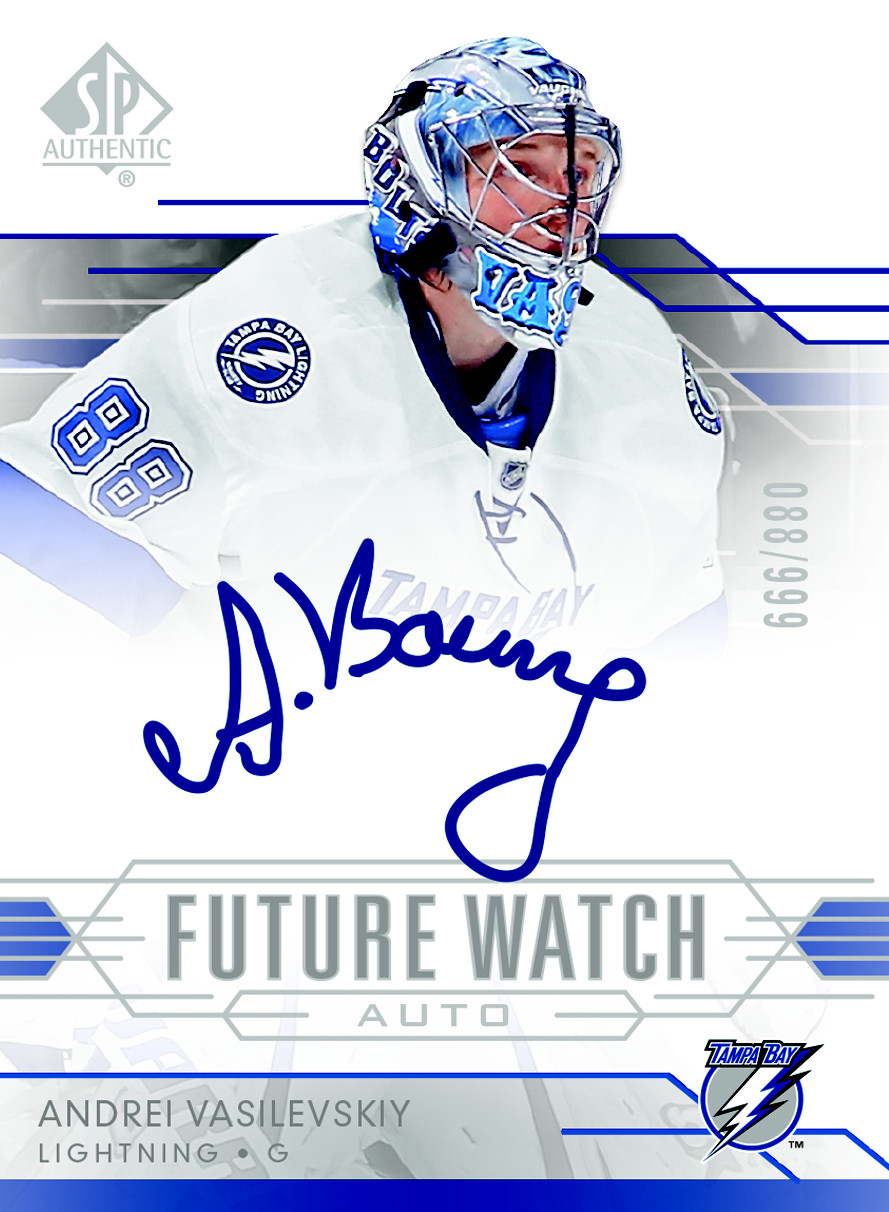