Panini America revolutionized the game when it comes to high-end trading cards with its first Flawless release back in 2012-13 and it is back once again this season with even more jaw-dropping cards and some new concepts. 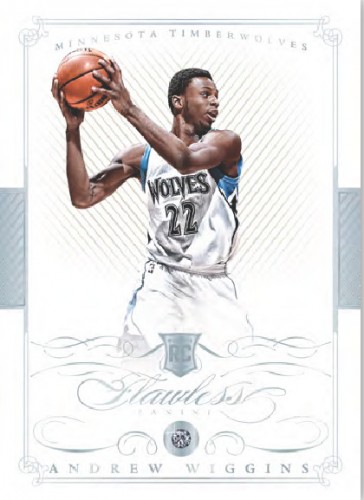 With presentation meaning so much, there is much pomp and circumstance whenever a pack of 2014-15 Panini Flawless  is opened since it comes in the form of a locked briefcase and the cards themselves are nestled perfectly inside. With a lofty retail price that is justified by its limited nature, Panini has provided some early details regarding Flawless and it is truly meant for advanced collectors – or those with deep pockets. 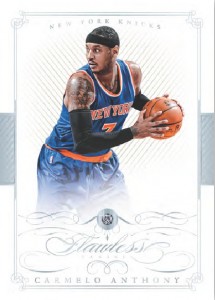 Possibly the most impressive base card set on the market, each Flawless card is a treasure all in itself as each card contains a jewel and will be numbered to 20 copies or less. As usual, the design is clean and it will be made up of today’s hottest stars, yesterday’s legends and the stars of the future.

Flawless has also added a new component to the base set in the form of a 30-card USA Basketball Alumni subset. Loaded up with three jewels that comes in red, white, and blue (ruby, diamond, and sapphire) to provide maximum visual impact. 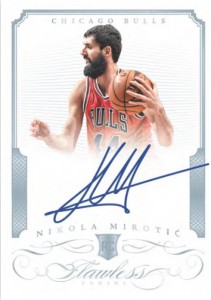 With a whopping six autographs in each box of 2014-15 Panini Flawless, collectors can anticipate a broad selection of sets to discover. The company revealed only a handful of details in their promotional literature, but the USA Basketball-themed Red White & Blue Triple Autos are sure to generate some excitement.

The last opportunity of the season to get hard-signed autographs from the past year’s heavily-hyped freshman class presents itself with Rookie Autographs and there will also be plenty of prime jumbo patch pieces to go along with ink in Momentous Autographed Memorabilia.

Details regarding the memorabilia cards for Flawless are limited at this point, but this product marks the debut of Dual Diamond Memorabilia, which has game-worn patch pieces or even a Logoman swatch from a dynamic duo.