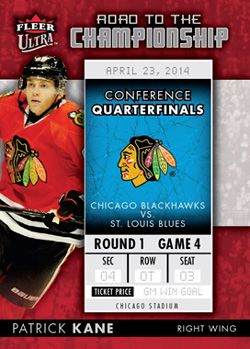 Upper Deck is bringing back an old name into the hockey market.

In September, 2014-15 Fleer Ultra Hockey will release as a standalone product after five years. Each box will come with 18 packs with six cards per pack.

Fleer debuted Ultra during the 1992-93 season for hockey. Upper Deck produced an Ultra set in 2009-10, and included Ultra cards in its Fleer Showcase and Retro revivals over the past couple of years.

The new version of Fleer will include Gold and Platinum (numbered to 99) medallion parallels hitting at least one in every two packs. It will also feature a number of die-cut inserts including Buckets, Net View, Gongshow Grinders, Rule 76 and Premier Pad Men.

Each box will have a Road to the Championship Replica Ticket Relics. These are replica tickets commemorating every home game played throughout the 2013-14 playoffs with the odds getting more difficult with each round.

Since Ultra hits so early on the calendar, collectors can find rookie redemptions for 2014-15 NHL prospects with Gold and Platinum Medallion parallels.

Autographs are included in 2014-15 Fleer Ultra, but they are tough pulls. The Fresh Ink Signature will fall at a rate of one in every 120 packs.

E-X Bonus packs will be included in every three boxes, on average. These packs will contain three cards with a chance at rare inserts such as Essential Credentials, Jambalaya, Legends, and Phenoms.

The base set will consist of 200 cards.

Fleer Ultra is scheduled to release on Sept. 17. 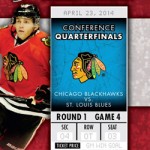 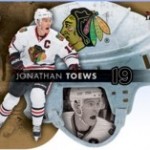 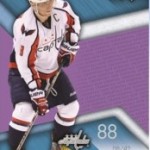 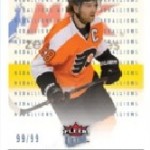 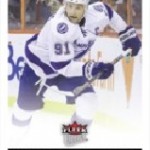