Once again, it’s time to take a trip down on the farm — and this year you might find Ebby Calvin “Nuke” LaLoosh.

Topps released the basic information and first preview images for its newest edition of minor-league cardboard on Friday as 2013 Topps Pro Debut will offer a look at life before the bigs for the fourth straight year.

As the exclusive licensee for in-pack cardboard for Minor League Baseball, Topps’ latest Pro Debut offerings will arrive on June 5 with two autographs, one patch card and one patch or Relic card in every hobby box.

The base set will consist of 220 cards — a preliminary checklist was not released — with 15 cards having a variation for collectors to chase. Each card also will have a Gold parallel limited to just 50 copies.

As an added bonus, there will be cut autographs from cast members of Bull Durham in the product — the likes of Kevin Costner, Tim Robbins, Susan Sarandon and perhaps even Max Patkin — along with “buyback packs” that are Bull Durham card sets available via redemption cards. The 1988 film, considered one of the best baseball movies made, examined life with the real-world Durham Bulls with reel-life memorable characters such as Crash Davis and Annie Savoy.

New this year will be Minor League Mascot Patches, which will feature an embedded fabric piece showing a mascot for one of the minor league clubs. These also will have parallels that are Gold (/50) and Red (1/1) versions. Another redemption in this one will be cards good for full memorabilia pieces.

Also among the patch cards are hat logo patches showcasing team emblems from several clubs. These also will have Gold (/5) parallels and 1/1 Red and printing plate versions.

Standard Relics will also be found and they will have Gold parallels limited to 50 and jumbo patch versions limited to just five copies.

For autograph fans, there will be Pro Debut autos that will have Gold versions as well as 1/1 printing plate and Red versions to chase. No autograph list was made available, but Rougned Odor and Shawon Dunston Jr. were among players shown on preliminary cards. 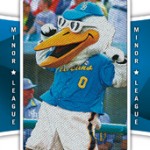 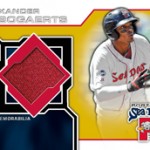 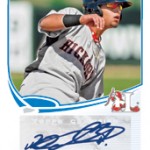 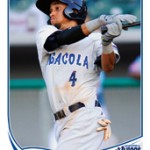 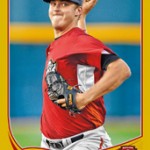 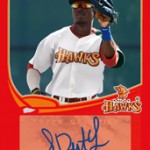