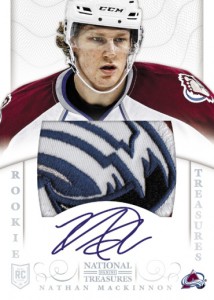 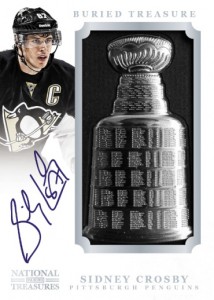 With the end of their hockey line looming, Panini America is looking to go out with a bang instead of a whimper.

The highly-touted release of 2013-14 National Treasures Hockey has already created some buzz in collector circles due to the line’s success in other sports. Set to release on August 27, 2014, each pack will contain eight cards and it breaks down into two base cards or parallels, one booklet card, one printing plate, one Rookie Autograph Patch card, one Autographed Memorabilia card and two additional hits that are sure to capture the attention of hobbyists.

Over the past few weeks, savvy collectors have taken note of the Treasured Steel cards (look for a feature story coming soon in Beckett Hockey #265) that have large pieces of game-used skate blades and the dazzling Buried Treasure Autographs featuring a metal Stanley Cup embedded into the card.

There is a lot more to get excited about, however, when it comes to some of the booklet hits that were recently announced. The fun starts with Dual Stick Booklets that feature autographs from two players done on stick pieces and jumbo stick pieces (and potentially nameplates) are found in Treasured Twigs. It gets even better with Jumbo Quad Booklets that bear four – yes, four – NHL shields and Treasure Chest Memorabilia, a collection that has a whopping 24 pieces of memorabilia in a single booklet card.

The final Panini hockey product also puts a cap on their side of the 2013-14 Rookie Double Class in fine fashion. The Rookie Autograph Patch cards are limited to just 99 copies each and feature parallels bearing other pieces of memorabilia, including the much-loved NHL Shield.

Perhaps the most intriguing inserts, though, are the Flawless cards. Limited to just five copies each (with a one-of-one Platinum parallel), they make the transition over from Panini’s basketball brand and feature an embedded diamond.

Needless to say, National Treasures is a beautiful farewell to the hockey card market from Panini and time may certainly be kind to many of the cards that will be found in packs.