If you’ve ever wanted to play professional baseball, now’s your chance.

Topps unveiled its plans for 2012 Topps Heritage Minor League on Thursday and one of the inclusions in the second-year run of the product is a chance to become a member of the Corpus Christi Hooks for a day next season and appear on a card in 2013 Topps Pro Debut, the company’s other annual MiLB release. The Hooks are the Double-A affiliate of the Houston Astros.

For those of us who don’t find the card, the set presents a chance to take an aesthetic trip down Memory Lane with a product that is styled after the colorful 1963 Topps set when it arrives on Sept. 12. Every 24-pack box of this hobby-only product will include two autographed cards and one Relic, while the 200-card base set will be capped by 25 short-printed cards seeded one in every six packs. There also will be 25 short-printed variation cards. Parallels will include Black cards as well as 1/1 Blue parallels and printing plates.

Real One Autographs will be found for several potential big-leaguers, 35 in all, each with Black parallels limited to 50, Blue 1/1s and printing plates. There will be 15 dual autograph cards to be found as well.

On the Relics side, there will be Hat Logo manufactured patch cards and a selection of Clubhouse Collection Relics — also paralleled with Black and Blue borders (same quantities). Dual Relics will be limited to just 25, while patch Relics will be limited to 15 and autographed patches also will be found. Also to be included are redemption cards for full pieces of game-used memorabilia.

The newest member of the Hooks will get to spend time with team owner Nolan Ryan, be subjected to the media at a press conference where the one-day deal will be signed, a locker in the Hooks clubhouse (or an adjacent area if winner is female), a full uniform and a full equipment package. In addition, the winner will take part in pre-game workouts, batting practice, shag fly balls in the outfield, eat from the clubhouse spread, throw out the first pitch, present the lineup card to the umpires, spend time in the broadcast booth, spend time in the owner’s box, chow with the team after the game and walk home with the lineup card. (Does sound like you’ll be riding the bench come game time, but you never know …)

Autograph signers on the preliminary checklist for this one include Dylan Bundy, Matthew Purke, Nick Delmonico, Mikie Mahtook, Danny Hultzen, Telvin Nash and George Springer to name a few. The Relic lineup is largely TBD but will include Bundy, Archie Bradley, and Francisco Lindor to name a few. 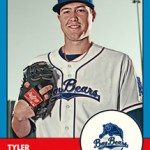 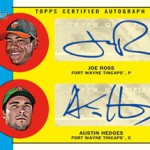 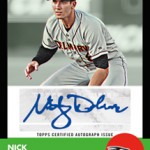 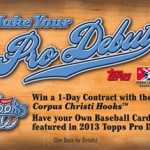 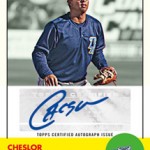 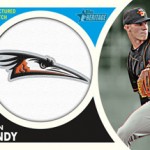 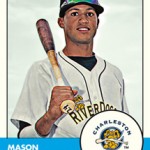