Topps unveiled the design for its 2012 flagship baseball card set on Thursday — the first look at what the company promised would be a “game-changer” of a year for the company’s products.

It looks like it will first attempt that with gold.

New this year is the Golden Giveaway, a successor to the Diamond Giveaway, which will allow collectors to unlock, you guessed it, cards with gold embedded into them. Code cards call one every six packs and will have a chance to unlock Golden Moments die-cut cards, Chrome parallels of those cards and virtual coins that can add up to win prizes. Also to be found are autographed gold coin cards, which will be limited to just five copies apiece along with 1/1 gold-embedded Golden Moments die-cut Chromes.

Series 1 will include one autograph or Relic in every 36-pack hobby box when it arrives on Feb. 1, while each HTA Jumbo box will include autograph and two Relics in each. The insert card lineup will include 1987 Topps Minis, Golden Moments, Golden Greats, Gold Standard, Gold Futures and Generations cards. These are all found at 1:8 packs or less.

The Relics will include the sets mentioned above along with In the Name Relics — cards made from this year’s All-Star Game workout jerseys and a 1967 Mickey Mantle reprint Relic.

Finally, there will be autographed Relic cards — all limited to 10 or fewer copies for the sets mentioned here except for the World Champions cards, which will be numbered to 50 — along with 1/1 sketch cards also to be found.

Also new are 1/1 Wood parallels, while the 2011 Diamond parallels return this time as Gold parallels while Platinum 1/1s also will be found. Other parallels will include Blacks, printing plates and a partial parallel of the set on silk.

Check out the images below and tell us what you think in a comment below or take the poll. 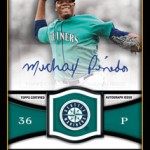 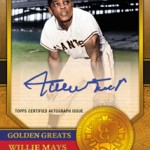 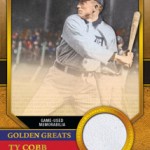 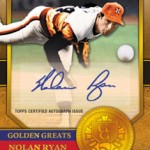