The sophomore campaign of Prime Signatures Football is getting a few upgrades from Panini America.

The configuration will remain the same with one autograph in every four-card pack, and just one pack per box.

Many of these new pieces will feature the most-hyped rookies of the coming season: Andrew Luck, Robert Griffin III and Justin Blackmon.

The Rookie Card autographs will be numbered to 199 or less.

One of the highlights seems to be Greatest Combo Signatures. These are dual autographs of some of the NFL’s greatest players numbered to 10 or less. While these cards will be a tough pull, think about getting Bo Jackson and Tim Brown on the same card (as pictured).

The Pen Pals insert was shown off during the NFLPA Rookie Premiere. Some of the 35 rookies there signed different versions of these cards that will feature two, three, four, six or eight signatures. There are 18 different cards in the Pen Pals insert set.

Prime Signatures is scheduled to come out in October, which is different than last year’s release, which only came out in early Spring. The product was developed as a re-imagined upgrade of the 2002 Playoff Prime Signatures.

While there is not more information available for this year’s set, last year’s Prime Signatures included a 261-base set and 86 rookies (Need a 2011 Prime Signatures OPG or checklist? Click here).

We’ll update information on 2012 Prime Signatures as it becomes available. 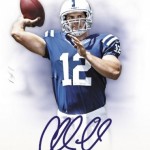 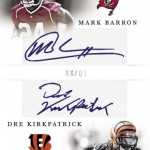 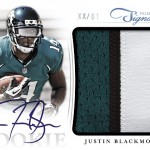 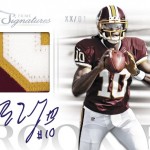 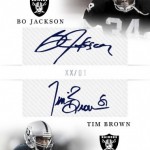 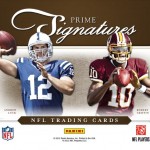 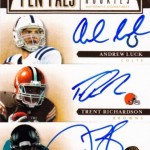