There’s a new prospect on the baseball card field.

Onyx Authenticated, an MLBPA-approved memorabilia licensee, is a relative newcomer to the packaged memorabilia field. But now the Riverview, Fla.-based company is taking the next step. On Thursday, the company officially unveiled its first baseball card product, 2012 Platinum Prospects, which will arrive on June 29 packing five autographed or game-used memorabilia cards per box. It will include a minimum of three sigs in each six-pack box, while acks will consist of five cards and there will be six boxes per case. Including inserts and parallels, there will be eight overall inserts per box.

The MLBPA deal does not apply here because the cards are just of prospects but the memorabilia options will be deep with patch cards as well as cards with swatches from cleats, batting gloves, caps, catchers gear and more, according to the company.

There also will be redemptions for full game-used memorabilia items from players.

Meanwhile, the autographs will include silver-ink or gold-ink versions and randomly inserted cards with inscriptions as well.

We’ll have more on this one when it becomes available. 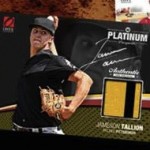 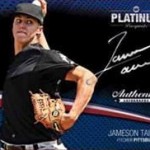 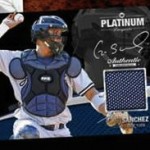 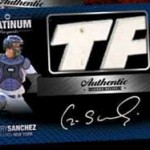 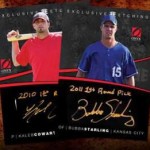