And it includes more ink than before.

Set to arrive on Dec. 12, each pack will include one rookie or prospect card and a combination of three hits — a mix of autographed prospects, autographed rookies, dual autos and more. There will be six packs per box. New this year will be Sterling Showcase autographs — a card embedded in a sterling silver frame limited to just 25 copies. These also will be found with 1/1 sterling silver parallels made entirely in silver.

Up next are the Next in Line dual autographs, a set that features a current rookie as well as a prospect paired together. This idea was submitted to Topps from a collector, Guillaume Robert-Demolaize, and the cards will be limited to just five copies apiece.

Also new for 2012 are Nickname Autographs, which will feature an appropriate inscription and be limited to just 15 copies.

Additional dual autographs in this one will be numbered to 99 or less with six parallels — Gold (/50), Black (/25) and Purple (/10) as well as Red, Canary Diamond and printing plates, which are all 1/1s. There will be plates for all standard cards in the product, too.

The latest installment of the Bowman Black continuity autograph set will return here — 25 players with each card limited to just 25 — while there also will be 25 redemptions good for a signed Yu Darvish baseball to be found.

Standard cards in the set will showcase 50 rookies from this season, each with the typical array of Refractors (standard, Gold, Black, Purple, Red, Canary Diamond), while there also will be autographed Rookie Cards to be found.There will be50 prospects showcased as well with the same Refractors, while up to 65 prospects will have autographed cards, according to the company’s preview information. 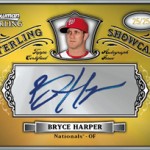 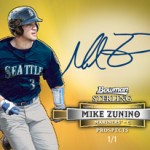 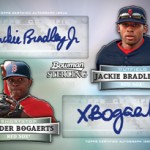 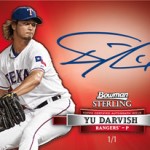 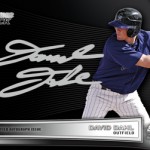 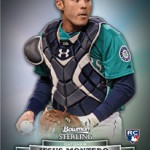 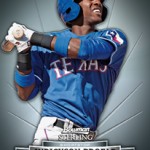 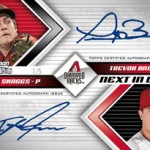 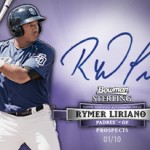