Get ready, Chromies, you now have a new date to mark on the calendar.

Topps unveiled the first look and basic set information for 2012 Bowman Chrome on Thursday, the latest chapter in the always-beloved brand that will pack a bit more punch this year.

Set to arrive on Oct. 17, it will include one Chrome autograph per box and every third box (12 boxes per case) will include an extra autograph, too. (Need a full checklist of past Bowman Chrome sets or an OPG? Click here.) Among the big names to be found in this one autograph-wise will be top names Yu Darvish, Bryce Harper and Yoenis Cespedes along with at least 35 prospects, a lineup that will include Jonathan Singleton, Matt Sczcur, Jake Marisnick, Pratt Maynard, Nick Catsellanos and Shawon Dunston Jr. among others.

Each pack will contain two base cards and two prospect cards. The base set will consist of 220 players, 50 of those rookies, while the prospects set will contain 110 players and also to be found will be 45 Futures Game cards.

As always the Chrome will be heavily paralleled with standard, Blue (250), Purple (199), Gold (50), Orange (25), Red (5) and SuperFractors (1/1) as Refractors for each standard and each prospect card.The autographs will have the same breakdown with standard Refractors limited to 500, Blues to 150, Golds to 50, Orange to 25, Purple to 10, Red to five and autographed printing plates joining the Supers on the 1/1 roster.

Non-prospect set insert cards will include a 25-card Legends in the Making diecut set (also with autographed versions limited to 15 or fewer copies) and Franchise All-Stars (a combo card of Futures Game players and MLB All-Stars) which also will be found signed. Players tentatively slated to have Legends autos include Albert Pujols, Cespedes, Darvish, Buster Posey, Clayton Kershaw and Felix Hernandez.

The Futures Game cards will be found one per box (18 packs) on Refractor stock and will have Patch Relics and Autographed Patches as well.

Rounding out the lineup will be the next offering in the Bowman Black multi-brand line — 25 new players signing here, including Darvish — while all base cards and prospect cards will also have printing plates. 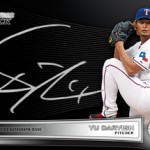 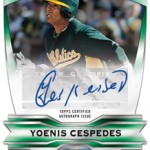 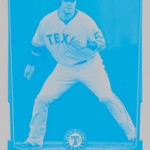 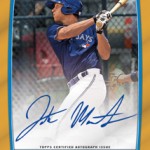 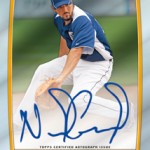 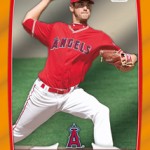 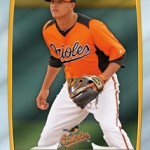 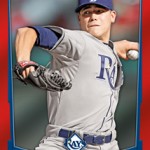 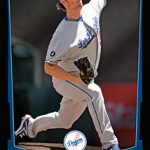