Panini America has yet another new basketball brand up its sleeve in this, the post-lockout full card year of 2012-13.

It’s Marquee, and it will include marquee-worthy printing tricks when it arrives later this year.

The tricks? They start with Panini’s “Swirlorama” and also includes laser-cut cards and holographic film board. In all, there will be five rookie subsets in the main set each with different printing technologies used. Hobby boxes will include 20 packs, three autographs and 35 Rookie Cards from a 150-card base set. A selection of the rookies will be signing for this product as has been the case throughout this season with its double-RC class.

Insert-wise, there will be 10 insert sets to chase — five of those signed — with a coach’s autograph set among the notables and Election Night autographs showcasing Hall of Famers.

The Swirlorama will be applied to the Slam Dunk Legends insert, while acetate also returns with the Champions insert, a 20-card release. The previously mentioned laser-cut cards will be  rookies, while the Stars of the Night inserts will be printed on black holographic board. 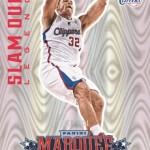 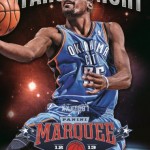 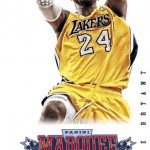 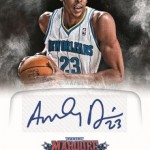 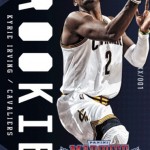 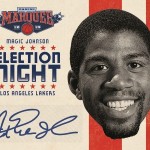